When the angels went away from them to heaven, the shepherds said to one another, “Let us go, then, to Bethlehem to see this thing that has taken place, which the Lord has made known to us.” So they went in haste and found Mary and Joseph, and the infant lying in the manger. When they saw this, they made known the message that had been told them about this child. All who heard it were amazed by what had been told them by the shepherds. And Mary kept all these things, reflecting on them in her heart. Then the shepherds returned, glorifying and praising God for all they had heard and seen, just as it had been told to them.

Major celebrations normally encompass extended opportunities for people to gather and enjoy each other’s company. Multiple Masses beginning on Christmas Eve and extending into Christmas morning allow for an extended celebration. The readings for the Christmas Mass at Dawn deal not so much with facts of Jesus’ birth as with feelings – wonder, enlightenment, and hope.

During this extraordinary time in world history with the world blanketed by a pandemic, the ability to gather with others is severely limited. Many will attend Christmas Mass virtually without the ability to rejoice as a community singing glorious carols. Being isolated from other people actually mirrors the situation in which Mary and Joseph found themselves, in a manger area separated from an inn where travelers lodged in Bethlehem. The innkeeper had actually shown kindness in removing the pregnant Mary from the open courtyard where everyone slept. No one, including his parents knew the future of the baby boy born that night in oblivion.

The shepherds in the story are notable for actually following through on what they had learned. Several shepherds may have become the emissaries of this good news while others stayed behind with their flock of sheep. These men who have been immortalized throughout history have become symbolic of people who hear good news and act on it. These lowly shepherds paid attention to something others at that time didn’t notice or even care about.

How often do we consider what we are hearing and experiencing and allow it to move us to action, pulling us beyond our comfort zones into new experiences? Are we indifferent to the stories we hear about people who are not celebrities? Do we only give our attention to famous people who have name recognition? To whom have we reached out during the pandemic? We are living in an extra-ordinary time which requires extra-ordinary responses from us. The shepherds would never be the same after their trip to Bethlehem and they may never have seen Jesus again until he was an adult. Mary and Joseph must have wondered what prompted visits from these shepherds, who were the lowest rank in their society, and then later from wise men from afar, both extremes of their social strata. We are praying that 2020 will be a once in our lifetime period in world history which we will continue analyzing for decades. Like Mary, may we keep all these things we have seen, heard and experienced and ponder them in our hearts! 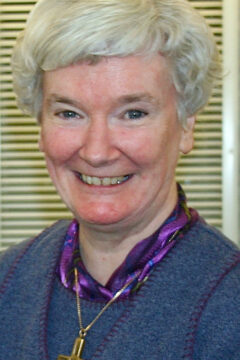 Sister Maria Delaney has been a Sister of Notre Dame de Namur for 56 years. Her professional background includes high school teaching and administration and ten years as Executive Director of the Notre Dame Education Center in Boston. From 2002-2014, she was based in Rome Italy as a member of the Sisters’ Congregational Leadership Team. In this capacity, she had the privilege of visiting the Sisters on five continents. She has also spent several years on the Board of Directors of the International Catholic Education Association which gave her the opportunity to visit Catholic schools around the world, especially those in remote areas. She is currently Director of the US Office of Sponsored Ministries, working with the schools and health centers that carry the Sisters of Notre Dame de Namur name.