In the sixth month the angel Gabriel was sent by God to a town in Galilee called Nazareth, to a virgin betrothed to a man named Joseph, of the House of David; and the virgin’s name was Mary. He went in and said to her, “Rejoice, so highly favored! The Lord is with you.” She was deeply disturbed by these words and asked herself what this greeting could mean, but the angel said to her. “Mary, do not be afraid; you have won God’s favor. Listen! You are to conceive and bear a son, and you must name him Jesus. He will be great and will be called Son of the Most High. The Lord God will give him the throne of his ancestor David; he will rule over the House of Jacob for ever and his reign will have no end.”

Mary said to the angel, “But how can this come about, since I am a virgin?” “The Holy Spirit will come upon you” the angel answered “and the power of the Most High will cover you with its shadow. And so the child will be holy and will be called Son of God. Know this too: your kinswoman Elizabeth has, in her old age, herself conceived a son, and she whom people called barren is now in her sixth month, for nothing is impossible to God.”

“I am the handmaid of the Lord,” said Mary “Let what you have said be done to me.” And the angel left her.

Watching and Waiting with Hope

Recently, the words from this hymn came to me, “O come, O come Emmanuel, and ransom captive Israel.” They woke me in the early morning to watch and wait for the dawning of a new day. This year the world is watching and waiting in the midst of the coronavirus. Death is all around us. Countries all over the world are in agony. Loved ones are suffering and dying with no one to be with them to comfort. Our planet is crying, is dying with global warming, natural disaster, hurricanes, hunger, war, corruption. Events of racial violence shock us. This nation has closed its doors to refugees seeking safety for their lives. The United States suffers a crisis of incompetence of leadership that is shameful.

In the midst of this, the message of a recent article in Time Magazine, “Kid of the Year” surprises me and gives perspective in which to pray the gospel readings of this week with new appreciation. I cannot in this reflection, go into all the details of her work, but I can give a glimpse. Gitanjali Rao was selected out of 5,000 nominees to receive this award. In the interview she tells of her work using technology to tackle issues ranging from contaminated drinking water to opioid addiction and cyberbullying, and about her mission to create a global community of young innovators to solve the problems of the world over. “Observe, brainstorm, research, build and communicate,” is how Rao describes her process. What stays with me is Rao is a teenager. She is 15 years old!

David who comes to us in the first reading was too young to serve in the army, but since he was the youngest of eight boys, he was sent by his father to bring food to his brothers who were in the service. On one of those trips he found out that the head of the opposing army Goliath, had challenged leader of the Israelite army,Saul, to a single combat, leader against leader. Saul was afraid and he tried to get someone to take his place. All the soldiers heard of it but they too were afraid. We all know the story. David the shepherd boy refused to wear Saul’s armor and with his staff and slingshot killed Goliath. Israel was rescued from harm. In the liturgy of today’s responsorial psalm 89 we pray: “I have made a covenant with my chosen one, I have sworn to David my servant: forever will I confirm your prosperity and establish your throne for all generations.” David was a young man, a teenage shepherd with courage and a slingshot!

In the Gospel from Luke we accompany a young Mary who is engaged to be married to Joseph whose family is descended from David. She is surprised by an Angel called Gabriel who was sent by God. She is afraid, but the Angel assures her that she has nothing to fear for she has found favor with God who is asking her to give birth to a son and call his name Jesus. Mary questions the messenger, “how can this be?” The Angel tells her that “the power of the Most High will come upon her and the child, Son of God will be born.” The Angel then goes on to tell Mary that her elderly cousin Elizabeth is six months pregnant with a son, despite the fact that everyone said that she was unable to conceive. Mary knew that Elizabeth and her husband Zachariah were deeply religious and had longed for a child. The Angel then says “nothing is impossible with God.” Mary responds, “Yes! I see it all now. I am the Lord’s maid, ready to serve. Let it be with me just as you say.” What does Mary do? She takes on a dangerous visit to be with and help her cousin Elizabeth. Mary was a teenager who believed, hoped, watched, waited and welcomed in her womb, Emmanuel.

The ransom has been paid. This Advent calls us to live as world family who love and care for all the family, giving refuge, reuniting the children separated from their parents, setting the prisoners free, helping build the areas destroyed by recent natural disasters, facing racial violence with courage and compassion. Emmanuel, God is with us! 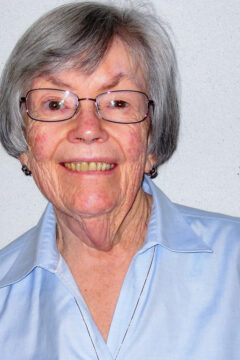 Betsy Mary Flynn entered the Sisters of Notre Dame de Namur in 1960. She taught high school at Central Catholic in Norwalk, Ct. East Catholic in Manchester. Ct. and Notre Dame, Bridgeport Ct. She was a member of an ecumenical team working with migrant tobacco workers to obtain their legal rights. From there worked as a counselor at Greater Hartford Community College assisting women wanting to continue their education by returning to school. In 1981, Sr. Betsy was missioned to Brazil where she served in Sao Domingos, Ma., Assuncao, Ce.,Itapipoca, Ce., and Fortaleza, Ce. She arrived in Ceara at a time of serious drought: many deaths, very grave shortage of water, crops destroyed, animals dying. It was the time after the Vatican Council and we were involved in participating in reflecting Life and the Bible in small groups all over the diocese. In 1997, Sr. Betsy went to Lima, Peru to study the Bible with leading Latin American Scripture theologians and delegates from all countries of Latin America. The Brasil team consisted of 5 from different parts of Brasil. She lived with the Sisters of Notre Dame in Delicious and got to know and appreciate the work of the Peruvian Province. On returning to Fortaleza, she began work with an Audiovisual team which made videos related to community problems of the interior and city. The work with women studying the Bible from the perspective of gender grew into the formation of AGAR, which continues to grow and be active in Ceará, She was a member of the Group “Grito pela Vida” (Cries for Life) an international network dedicated to education about and concrete action to eliminate the trafficking of adults and children. The years 2000 to 2015, was time of insertion in living experience with two poor neighborhoods in the capital city of Fortaleza. In September of 2015, Sr. Betsy returned to the States for reasons of health. She presently lives in Julie House, a community of 19 Sisters. Prior to the Coronavirus Pandemic, she worked as a volunteer translator with Malta, a health project which gives quality care for the poor in three different sections of Harford and one in East Hartford. She is a team member of the SNDdeN immigration project and has worked with migrants seeking asylum in McAllen Texas, and those camping out in the occupation at the bank of the Rio Grande in Matamoros, Mexico.