That very day, the first day of the week, two of Jesus’ disciples were going to a village seven miles from Jerusalem called Emmaus, and they were conversing about all the things that had occurred. And it happened that while they were conversing and debating, Jesus himself drew near and walked with them, but their eyes were prevented from recognizing him.

He asked them, “What are you discussing as you walk along?” They stopped, looking downcast. One of them, named Cleopas, said to him in reply, “Are you the only visitor to Jerusalem who does not know of the things that have taken place there in these days?”

And he replied to them, “What sort of things?” They said to him, “The things that happened to Jesus the Nazarene, who was a prophet mighty in deed and word before God and all the people, how our chief priests and rulers both handed him over to a sentence of death and crucified him. But we were hoping that he would be the one to redeem Israel; and besides all this, it is now the third day since this took place. Some women from our group, however, have astounded us: they were at the tomb early in the morning and did not find his body; they came back and reported that they had indeed seen a vision of angels who announced that he was alive. Then some of those with us went to the tomb and found things just as the women had described, but him they did not see.”

And he said to them, “Oh, how foolish you are! How slow of heart to believe all that the prophets spoke! Was it not necessary that the Christ should suffer these things and enter into his glory?” Then beginning with Moses and all the prophets, he interpreted to them what referred to him in all the Scriptures. As they approached the village to which they were going, he gave the impression that he was going on farther. But they urged him, “Stay with us, for it is nearly evening and the day is almost over.” So he went in to stay with them. And it happened that, while he was with them at table, he took bread, said the blessing, broke it, and gave it to them. With that their eyes were opened and they recognized him, but he vanished from their sight.

Then they said to each other, “Were not our hearts burning within us while he spoke to us on the way and opened the Scriptures to us?” So they set out at once and returned to Jerusalem where they found gathered together the eleven and those with them who were saying, “The Lord has truly been raised and has appeared to Simon!” Then the two recounted what had taken place on the way and how he was made known to them in the breaking of bread.

Who is the third who walks always beside you?
When I count, there are only you and I together
But when I look ahead up the white road
There is always another one walking beside you…
— But who is that on the other side of you?
T.S.Eliot

A poetic reflection on the Emmaus journey which is such a significant story for Easter. The death of someone we love is probably the most powerful and devastating experience we ever have to face. Little wonder then, that Cleopas and possibly his wife were on the Emmaus road, in the despair and hopelessness of grief, after the death of Jesus. Into this void a stranger came and walked with them. He was prepared to listen to their hopes and dreams which had all been destroyed, and offer some explanation about recent events. During the walk the disciples were changed. Their openness and trust enabled them to offer hospitality at the end of the day to their unknown guest.

Caravaggio has a wonderful picture of this supper at Emmaus. As I reflect on what happened next, I am drawn into this painting. Darkness and light, such essential elements with Caravaggio lead me towards the central figure of Jesus. He extends his hand, towards me, the viewer, inviting me into the scene. There Jesus performs an ordinary action – he breaks the bread to share with his companions. In that moment time stands still, the familiarity brings blinding insight and the disciples know that he is their Risen Lord. Then he is gone from their sight, but now they know with certainty that He is truly alive in and with them for all time. Their journey has become total revelation. “Were not our hearts burning within us.” With all weariness changed into joyful energy, they are prepared to go back to Jerusalem immediately to share the good news.

“But who is that on the other side of you?”

Those first Emmaus disciples didn’t recognise their walking companion, but today it is the Risen Lord who accompanies me through life. If I am in touch with the ‘one on the other side of you’ maybe I am then in a position to understand the ‘other side of me.’ Together we explore the darkness and the light of who I am. Together we explore that part of me, that ‘hidden self’ that potential, still waiting for the Easter Light to penetrate. Somewhere in that Easter light is the person I have yet to become, somewhere is the invitation to an ever deeper relationship with my Lord and God until that is my all consuming passion.

The choice is mine!! 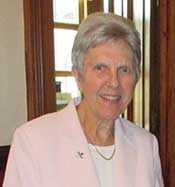 Sister Theresa (Tess) Rynn was born in Lancashire, England, the fifth of six children. She entered the Sisters of Notre Dame de Namur, in Ashdown in 1956. She was a Primary School Head Teacher for some years and then moved into local leadership in the British Province, with particular care for the sick and elderly. Alongside this she was involved for many years on the Formation Team in the Province, working with the newer members of the Congregation. This was followed by some years as Novice Director, after which she returned to local leadership for a time. She has worked in School and Hospital Chaplaincy, and with Children and Adult Hospices. She continues to be involved in Spiritual Direction and Retreat work.

She serves now as Moderator of the Parbold Community where our Sisters receive health care.

Our thanks to the Congregational Mission Office of the Sisters of Notre Dame de Namur, which publishes Gospel Reflections for Sundays and Feast Days.