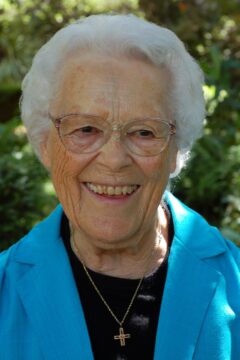 Although Sr. Alberta never wanted to be a teacher, she became an exceptional one, and considered her 60 years in the classroom to be one of the greatest blessings in her life.  She loved seeing the difference it made when children received the attention, affection and discipline they needed. Jim Lucchesi, one of Sr. Alberta’s 40 energetic primary grade students at Notre Dame in Chico, still remembers her as a very positive, nurturing educator.

Sister taught in three states and in twelve different elementary schools, including St. Lucy in Campbell, Immaculate Heart in Belmont and Mission Dolores in San Francisco.  She later volunteered at Our Lady of Mt. Carmel in Redwood City, where principal, Teresa Anthony said, “It is her gentleness with the children and her positive attitude that were such valuable additions; the children thoroughly enjoyed her helping them with reading, language arts and math.”  Even in her 90s, she continued to tutor a few students in phonics.

While living in the Province Center community, Sister enjoyed visiting assisted-living residents at Ralston Village. “She has a smile, warmth and compassion that you rarely see in people,” former Executive Director, Nina Mazzo, said

One of her greatest joys was helping in the early 1990s to raise her beloved grandnephews – Jesse, Shane, Corey, Rich and Dominic.  When two of them later became part of a Rock band in L.A., Great Aunt Alberta remained their biggest fan.

Mass was celebrated at 1:00 p.m. on Saturday, April 23, at Cunningham Chapel at Notre Dame de Namur University in Belmont.  She is interred at Holy Cross Cemetery, Colma.

We'd love to read about your memories of Sr. Alberta! Please share them in a comment below.

More about Sr. Alberta at the time of her 75th Jubilee as a Sister of Notre Dame:

After nearly dying of diphtheria as a child, Alberta Marie Karp learned early on that life was fragile. Full of gratitude, she felt God's call to her while kneeling at the communion rail of St. Anthony's Church in San Francisco. So, it was with some surprise that Sr. Alberta found herself celebrating her 75th year as a Sister of Notre Dame in 2012. She admits she never expected to live this long!

While it's been a good life, she laughs at her rocky beginning as a Sister. In 1940 she was sent to Dolores School in Santa Barbara to teach second grade. And as she recounts, "teaching was the last thing I wanted to do!" But, thankfully, in no time at all, she discovered that she not only liked teaching, but had a gift and a passion for it.

In 1957 she became a proponent of the "Writing Road to Reading" method and found it a tremendous teaching tool.  Alas, not every principal approved of the phonics method, but Sister found that with some "adaptation" she could still use it and had the joy of seeing children quickly learn to read and spell.

As was typical at the time, Sr. Alberta was given many different missions and taught at 12 different Notre Dame and parish schools including: Notre Dame Elementary School in Chico, St. Lucy's School in Campbell and Immaculate Heart School in Belmont.  Jim Lucchesi said of Sister, "She was my first through third grade teacher at Notre Dame Chico. One could not have been blessed with a more nurturing educator. She was able to maintain control of 40 energetic primary grade students through the power of positive direction and instruction."

Sr. Alberta also had the experience of working with children with multiple handicaps. In the '60s she was paired with an unruly four-year-old boy who couldn't walk or talk. She helped him with gentle, but firm discipline. She sang to him and gave him the attention and affection he craved. In a short time, the boy's behavior and skills had progressed enough to allow him to attend school with his peers. "From that experience I learned that every child, if given TLC and a chance, is capable of learning!" says Sr. Alberta.

She's had many "highs" in her lifetime. A favorite was meeting President Dwight Eisenhower and First Lady Mamie in Carmel (1956) and she has saved a letter he sent them after the visit. But even that visit couldn't compare with the joy of helping raise her three grandnephews Jesse, Shane and Corey in the early '90s.

Perhaps the hardest thing she has faced is giving up teaching.  "I loved teaching little children and working with young minds."