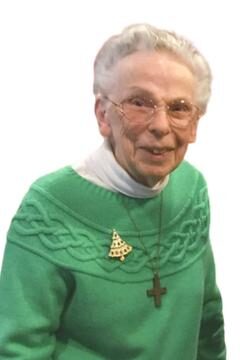 Ann Brennan, SNDdeN, and her older brother were raised in Milton, Mass. Their parents, Albert and Mildred (Davenport) Brennan wanted the children to have a Catholic education, so both attended St. Gregory School in Dorchester, Mass. where they were taught by Sisters of Notre Dame de Namur.

Sister Ann recalls that in the sixth grade one of their regular class assignments was to read aloud letters sent by Sisters serving in Okayama, Japan. She looked forward to hearing about what the youngsters going to school in Okayama were learning and doing, and it kindled her interest in serving in the Missions.

In high school, she felt called to join the Congregation and, still inspired by knowing of the Sisters’ work in Japan, did so after graduating from St. Gregory in 1947.

In 1956, just a year after taking her perpetual vows, Sister Ann and three other Sisters made the long journey to Japan by boat. They brought 18 full trunks of things like towels, cloth and pencils with them because supplies were very limited in post-war Japan. Even during the voyage, Sister Ann was furthering her education by taking a course in English from another Sister.

It was in Japan that Sister Ann formally completed her degree from Emmanuel College.

She later earned a master’s in Elementary Education from the University of Massachusetts, Boston and became certified to teach English to Speakers of other Languages (ESL).

Sister Ann feels extremely fortunate that while in Okayama she was able to live with the very first group of SNDdeNs that went to Japan—women who had been interned during WWII. She describes them as “Beautiful, beautiful people,” and she valued the close community of Sisters there.

Sister Ann taught in Okayama for about five years, and then went to Hiroshima for a year and a half. News of her mother’s grave illness and impending death sent Sister Ann back home to Massachusetts.

Following her return to the U.S., Sister Ann taught elementary grades at Massachusetts schools. Her hope, however, was always to return to Japan.

Except for a brief period in the 1990s, this was her last time in Japan, but there would more international living to come.

Back in the U.S. again, Sister Ann became secretary to the principal of Cathedral High School in Boston. At that time, there were many newly-arriving students from Southeast Asia, and Sister Ann became their ESL teacher.

She then moved to Rome for a year to serve as a member of the SNDdeN Generalate Staff, where she kept records for the Congregation and taught English to a number of young refugees from Eritrea. Many ultimately went on to live in English-speaking countries. One of the young men she tutored went to the U.S., studied medicine, and is now an M.D. who regularly goes back to Africa to care for his people.

Sister Ann's dedication to teaching English as a Second Language continued. For about 15 years she taught and tutored immigrants from many countries at the Notre Dame Education Center in South Boston.

Though she has been retired from formal ministry for some time, Sister Ann has been involved in activities such as sewing clothing for children in Haiti, and knitting hats and other items for donation to people in need.

Not surprisingly, even now Sister Ann is helping a new immigrant to improve her English skills. She and another Sister living in Ipswich meet weekly with a member of the housekeeping staff who had to flee her life as a college professor in Ukraine when the war with Russia began. Sister Ann feels very appreciative of and humbled by how many immigrants who had prestigious roles in their home countries have adjusted to much more modest circumstances with grace.

At this time of her 75th Jubilee, Sister Ann describes her favorite ministry:

“It was a grace-filled moment for me to teach people from other cultures because they had so much to share from and about their own culture and experiences. They may be learning English and they may be making a lot of mistakes but inside they are treasures!”

To make a gift to the Sisters in honor of Sister Ann's Jubilee, please click here.