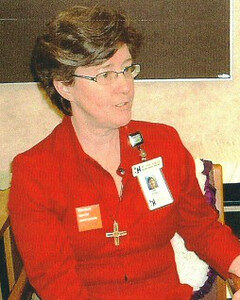 “I was raised to be a wife and mother, I discovered along the way that I was born to be a Sister of Notre Dame de Namur.”

When I came into the family, my parents were married 10 years and were already raising two boys and a girl. My birth caused an addition to be constructed on the house where we lived in the suburb of Trumbull, north of Bridgeport, CT. Eighteen months later, my sister, Patricia, was born and our house held eight members, including my Grandpa, who owned our house. My Grandfather, the son of an immigrant farmer from Ireland, was the one who moved his family to Trumbull in 1938.

As the fourth of five children, I think it is fair to say that I did not have to make many decisions until it came time to apply to college. Decision-making is, for me, a challenge to this day. With every ‘yes’, there are at least three ‘nos’. Now, I work with students towards practicing discernment in prayerful decision-making, in Ignatian spirituality.

Our neighborhood was a collective of mostly Catholic, mostly Italian and Irish families who had children who attended the local Catholic school. As children, we formed a neighborhood playgroup (mostly unsupervised) and spent lots of time exploring the ‘valley’ with its Housatonic River and long stretch of trail. The SSNDs and later the SHFN communities taught in the parish schools, and we played ‘school’ and ‘Mass’ as part of our afterschool outdoor activities as we weathered the changes brought by Vatican II.

We played basketball and kick ball, and we accompanied each other through school until it came time for college, which sparked our venture into other worlds besides our intergenerational neighborhood. I joined the girl scouts, swim teams, and an ecumenical youth group, taking a leadership role in our Nichols Youth Fellowship during senior year. I worked as a babysitter for a new family and later as a nurse assistant at our local St. Joseph’s Manor, run by the Carmelite Sisters of the Sick and Infirm. The older kids, early baby boomers, led the way as nearly all embarked on college life after high school.

In our home, my brothers attended Fairfield Prep and then Holy Cross College, in Worcester, MA. We girls attended the local public high school and state colleges. I graduated from U-Conn in 1977 and I asked if I might explore my religious life call with the Sisters of Notre Dame de Namur, who had a provincial house in nearby Fairfield. I had befriended the local community of SNDdeNs who lived on the beach in Milford, CT during my U-Conn days. My parents agreed that I might try religious life, and ‘get it out of my system’, however, the Sisters’ dedication to justice, to anti-apartheid efforts in South Africa, and to Jesus’ gospel way impressed me deeply and, to my friends’ surprise, I decided to stay another year, and another… and am happy for this decision to this day. My parents, Sue and Joseph, grew to love the SNDdeN and my part in this community, becoming avid supporters.

As a SNDdeN, I have taught elementary and adult students, studied theology and ministered in campus ministry, served as Notre Dame Mission Volunteer AmeriCorps site director, pastoral ministry in a parish and chaplaincy in a hospital.

My best decisions include studying for an M.Div, graduating in 1990, so as to be ready for ordination, and, in 2007, taking CPE so as to become a Board Certified Chaplain. Like many of my decisions in life, God’s own hand carried me further than I expected, because, for instance, I took CPE to learn ‘the art of listening’ better. What transpired, however, was gaining BCC status which enabled me to sit with strangers in their homes, or hospital rooms, and listen and then pray together, for the grace of a felt Presence during whatever the issues in hand were being presented, by family or work experiences, by health or spiritual yearnings.

Ministering as a SNDdeN, a disciple of St. Julie so dedicated to education of women, especially the poor ones, has been a path of meaning and purpose that deepens as I grow older. And now, having moved to Washington DC from CT for a place in a formation community, I have assumed duties as Director of Campus Ministry at Trinity Washington University, which has a beautiful story of reaching women who seek to be college-educated.

I am grateful to all who have enabled me in this present position and I trust God in my life to empower me each day to do good among God’s own cherished people.

Highlights: Being a friend, being a sister, being a Sister, becoming an auntie, and now Grandaunt… being a community member and holding the torch of God’s light to those I meet in daily ministry. Prayer is my privilege, as I remember so many each day, and also deepen my intimacy with Jesus in Scripture and my life as it becomes visible from the path I walk each day. Amen. Alleluia!

“I was raised to be a wife and mother, I discovered along the way that I was born to be a Sister of Notre Dame de Namur.” Deo gratias!