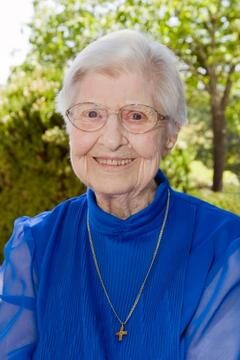 Growing up in Alameda, she graduated from Notre Dame Academy and, following in the footsteps of her beloved sister, Mary Wilma, entered the Sisters of Notre Dame in 1929. Sister Ann Maureen described her life as a long and blessed journey.

Sister began her nearly 50-year teaching journey with first graders at Our Lady of Mt. Carmel School in Redwood City. Completing both a BA and MA in English, countless students received the gift of her vocation as she taught and administered at Notre Dame schools in Redwood City, San Francisco, Belmont, San Carlos, Alameda, Marysville, Honolulu, Salinas and San Jose. She also served as pastoral minister at Our Lady of Mt. Carmel and as librarian at College of Notre Dame.

Observing that "when you retire, you retire to something else," Sister Ann Maureen filled her post-teaching years by helping to computerize the library at College of Notre Dame, assisting with the Sisters' archives, and memorizing something new each day to keep her very alert mind active. She helped as a receptionist at Notre Dame Province Center until age 97 when she did indeed retire to Mercy Retirement and Care Center in Oakland for the final months of her life.