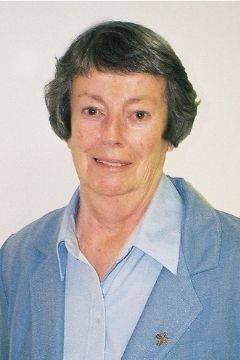 Barbara was born in Winnipeg, Canada. Eventually the entire family moved to Marysville, California, where St. Joseph Church and Notre Dame School were the center of her early Catholic life. She remembers helping the Sisters teach the younger children during summer school and thinking that she, too, would like to be a teacher.

Most of her teaching career was spent in Notre Dame de Namur elementary schools in Chico and Alameda, then in high schools in Watsonville, San Jose, Belmont, Marysville, and Salinas, California. One of her favorite assignments was Hawaii, where she had the opportunity to teach on a faculty with many Sisters from different religious orders.

Sister Barbara, who was gentle, soft-spoken, attentive to others and very kind, also served as Principal and, with “the grace of the charge,” the unlikely position of dean of discipline. She especially enjoyed teaching religion and history and was inspired by the enthusiasm and idealism of the high school students she taught.

Community living in Notre Dame was a special blessing for Sister Barbara. She felt the goodness, faithfulness, and spirituality of her Sisters as a gift in her life. When she served as the Director of the Boarding School, Sister Teresa Augustine wrote of her: “Sensitivity has made Sister Barbara special and all of life special to her. Her realization that the awesomeness of living is contained in seemingly inconsequential details enables her to be deeply and delicately aware of people, a vital quality for a Boarding School Director and Guidance Director.”

At the Province Center in Belmont, where she lived for several years, she was happy to assist in the third grade at Immaculate Heart of Mary School and to take Communion to the sick at Belmont Vista Convalescent Home.

Beginning in 2013, Sister Barbara lived at Mercy Retirement and Care Center in Oakland, She could be counted on to accompany any of the Sisters when they were dying. Given this special gift, it is quite appropriate that Sister Barbara died on April 8, the anniversary of the death in 1816 of Notre Dame Foundress St. Julie Billiart.

St. Julie was known for her simplicity, charity, and obedience, qualities that Barbara expressed throughout her life. Known also for being gentle, soft-spoken, attentive to others, and very kind, Sister Barbara enjoyed community living and stated that “the presence of God is the greatest blessing of my years as a Sister. In the ordinariness of life, in the small miracles – it is being present in quiet in the community of prayer.”

Daughter of Raymond and Genevieve Hanagan, sister of Raymond Hanagan, Gloria Booth, and Alice Andreason, and aunt of David Hanagan (all deceased), she is lovingly remembered by her nieces Barbara Thompson and Maureen Harra, nephews Stephen, Paul, and John Hanagan, friends, former students and her Sisters of Notre Dame de Namur.

In Sister Barbara’s own words:

“Oh my, I’m in Chapel
Looking at the Lord
Seeking to be blessed
Four of us now
Wonderful silence
Spirit-filled quiet
Be Still
God is here!”

Sister Barbara died on April 8, 2022 at age 95 and 76 years as a Sister of Notre Dame de Namur. A Mass of Resurrection will be celebrated on Thursday, May 26th in the Chapel at the SNDdeN Province Center, 1520 Ralston Avenue, Belmont, Calif. at 11:00 a.m. She will be interred in Marysville, Calif. May she rest in God's loving embrace forever.