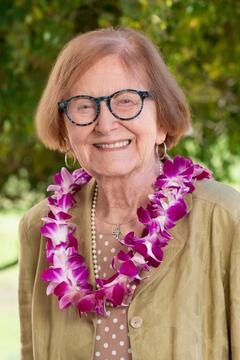 Sister Barbara Ann Kavanaugh has always found the richness of her life in friends, family, community, and celebrations. A meaningful gospel story for her is the wedding feast at Cana. “This was a big party," she says. "And it is such an example of God’s goodness. Jesus and Mary were with friends. The celebration had lasted for hours or days. Mary didn’t need to explain or ask Jesus anything; she just commented that they had no wine. And, in goodness and friendship, the water became wine.”

Barbara and her two brothers grew up in a very affectionate, third-generation Irish family in the midst of an Italian neighborhood in San Francisco. She began dancing at age five, and though her weekly tap dancing lessons were stopped in sixth grade, when her mother insisted she attend the Stations of the Cross instead, she continued to dance and perform. Even now, she occasionally does some tap steps at home, saying, "Life is a dance, and God was calling me to dance, but it took quite a while to figure that out!"

After attending very diverse public elementary schools, she went on to Notre Dame High School in San Francisco. In 1947, her Pastor, Bishop Connolly, told her that she had a religious vocation and her response was, "But I don't want one!" Her goal was to become a nurse, get married and have children. She came to realize that religious life was her future, though the decision was difficult, especially at a time when Sisters were not usually allowed to visit their families at home. In fact, 17 years passed before Sister Barbara visited her parents' home again.

For her first 33 years as a Sister, Sister Barbara Ann taught in Notre Dame elementary schools. She hadn't expected to love teaching, but she did! And from the beginning, her students loved her and still do. At the end of her first week at our Lady of Mt. Carmel School in Redwood City, a small boy shyly asked if he might speak to her. “He took something out of his pocket and showed it to me. It was a ring. Then he said, ‘Sister Barbara Ann, would you go steady with me?’” With great care, she explained she was already "going steady," but she was happy to be his friend.

Later, as a more experienced teacher at Notre Dame Elementary in Belmont, she taught first grader Pegi (Shenk) Chesney. “We danced in tutus and put on a play about cats. She chose me to be the mother of the cats. She knew just how to handle me. She was without doubt my very favorite teacher, and I am proud to be her friend as she continues to influence me to this day.”

A few years later, Sister Barbara Ann was assigned to a most challenging seventh grade class at Mission Dolores Boys’ School in San Francisco. Just days into the school year, she realized how much she liked her “rowdies” and discovered that they liked her, too. Not long ago, she received a letter from one of these students, now an ER physician. He wrote, “You always had faith in me… and never made me feel like I was a ‘trouble maker’ or ‘leader of the gang.’ You inspired me to do well and to believe in myself.” Sister Barbara now says that teaching 7th grade was her favorite.

Kathleen Spillane, one of Sister Barbara Ann’s seventh grade students at Mt. Carmel School, remembers the strong family involvement and a community of caring teachers there. “Sister Barbara Ann, even then, was a modern woman, a strong-minded teacher, and interested in the arts and in the young people crowding her classroom. There were musicals, elaborate productions that Sister made happen. We knew then, and know years later, that she cares deeply for us.”

During the 1980s, Sister Barbara Ann was surprised to be asked to consider working in the Sisters’ finance office. After many years as a teacher, there was a great deal to learn to become successful in her new role. She came to understand finance as a ministry. “My new mission reflected a need to honor the past, respect the present, and hope for the future. In teaching, I felt I was protecting young lives; in finance, I am protecting older lives through care of our resources.”

When celebrating her 70th Jubilee, she said, “Memory is a sun that shines upon the treasures of your life: my family and my SNDdeN family, friends, students and their parents and my co-workers. I was among those planting the first seeds of St. Julie’s love at St. Francis School in Seahurst, Washington, and at St. John Notre Dame Elementary in Folsom, California. Visiting the school in Folsom fifty years later, I saw how faculty and students still knew and loved St. Julie. They know ‘God is Good.’ I am grateful and blessed!”

True to the Kavanaugh spirit, Sister Barbara a.k.a "Auntie Bob" is celebrated by her loving family, which includes 33 great-grand-nieces and -nephews!