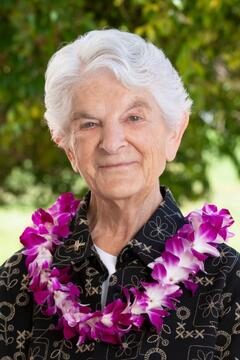 Barbara Matasci was a student at Notre Dame High School, San Jose, when Sister Roberta Julie asked her, "Have you ever thought of being a Sister of Notre Dame?" After an adamant "NO" she began to think about it. She had always wanted to be a teacher and she loved these great women who taught her. "Well," she thought, "I can do both. I can be a Sister and a teacher."

Today, Sister Barbara looks back on 70 years as both Sister and teacher. Her first years in the classroom sent her all along the West Coast – Los Angeles, the San Jose area, and Seattle. Then in 1964, she was named superior, principal and sixth-grade teacher at the new Madonna Del Sasso School in Salinas, Calif.  With the exception of six years as principal of Most Holy Trinity School in San Jose, she has been in Salinas ever since as principal of Madonna Del Sasso, Assistant Superintendent of Schools for the Diocese of Monterey, and, now, Alumnae and Community Relations Director of Notre Dame High School, Salinas. With her many, many friends in Salinas, Sister Barbara is just the right person to serve in this ministry.

Barbara grew up in San Jose, California, in a farming family at what is now the intersection of Almaden Espressway and Blossom Hill Road. She sees that her parents did for her what St. Julie told her Sisters to do for their students: "Teach them what they need to know for life. It was a very wholesome life on the ranch," she remembers. "We were given responsibilities—feeding the chickens, gathering the eggs, milking the cows, picking the prunes. We were loved and respected. We learned to give and be present to people."

"I was amazed to be assigned to Madonna Del Sasso School. It was as if God was speaking in a very special way. My mother had worshipped at Madonna del Sasso Church in Switzerland!" She remembers Msgr. Neary, then pastor, with great respect and love. As teacher and principal she could mentor new teachers and be part of their story. "We were a community," she says. "We believed, trusted God, loved each other. We truly knew how to celebrate. It was easy to be involved as much as we wanted and were respected and appreciated." These blessings were topped off when, celebrating the parish's 25th anniversary, Father Michael Cross had the idea of a parish pilgrimage. She hadn't even thought of going and, when he started talking about relieving her of her duties, she thought she was being fired.  But no, she was being given this pilgrimage to her mother's home church in Switzerland!

For anyone who knows her, it is obvious that Sister Barbara identifies with the Notre Dame Hallmark calling her to community and friendship among those with whom we work and with those we serve. Former Principal Andy Bedell says, "Sister Barbara is priceless, incredible, caring. She's here whenever I get here in the morning, before going off to Mass and then coming back to work with alumnae. Everybody knows Sister Barbara. When they can't reach the school, they call her. She is the face of Notre Dame for Salinas and our school community–tireless, faith-filled and dedicated."

How does Sister Barbara feel as she celebrates these many years…"I feel I have greatly blessed by the journey and I am extremely grateful."

Watch Sister Barbara in the video below as she reflects on her life as a Sister of Notre Dame de Namur.