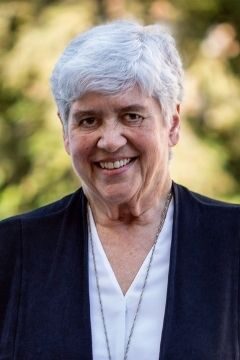 Sister Barbara Thiella has a commanding presence, a sharp mind, a heart full of compassion and, as one homeless man noticed, “a kind look in her eyes.” These attributes have stood her well during her years working in formal education—as a teacher, administrator, campus minister—and while serving the Sisters and the church in leadership roles.

When Barbara graduated from Notre Dame High School in San Francisco, she knew she wanted to enter the Sisters of Notre Dame de Namur. “Their way of being together, their cordiality and care, all called to me,” she says. “I don’t have words for how the desire came; it was deep inside of me to 'come and see.'”

Barbara entered the novitiate and became Sister Andrea. She graduated from what was then College of Notre Dame in Belmont, Calif. and obtained her graduate degree in theology from the University of San Francisco, along with a California credential in school administration.

She taught English and Religious Studies in high school, and was a vice principal and principal. She reflects that, “As a teacher, I had the possibility of influencing young people; as an administrator, I could assure that the children’s needs would be addressed.” The benefits of her work impacted hundreds of children, their families and teachers in four dioceses: San Francisco, Monterey, Sacramento, and Honolulu.

Sister notes that she likes “to bring about change in a system that will benefit people,” and her ability to influence at a fundamental level marked the second half of her life in ministry. She served for 10 years as Vice Chancellor in the Diocese of Oakland. She then directed personnel and ministry planning for the SNDdeN California Province, before becoming a member of the California Leadership Team.

For 17 years, Sister Barbara served as Chancellor of the Stockton Diocese, coordinating and implementing a number of programs that brought life and joy to the 36 parishes and 12 missions in the diocese. Along with many other responsibilities, Sister Barbara was the diocesan point person for clergy, staff and parishioners who seek advice. She claims she didn't have the wisdom of Solomon, just a good grasp of what’s needed and the resources available. An especially notable aspect of her service began in 2002, when she was asked to coordinate the diocese’s response to those victimized by clergy abuse, and she was inspired by the victims’ courage in facing deep pain.

Bishop Stephen Blaire led the Stockton Diocese throughout Sister Barbara’s tenure, and in 2014 he awarded her the Bishop’s Award for Lifetime of Religious Ministerial Service. When speaking of Sister Barbara’s responsibilities he said, “To all these tasks she brings the wisdom of experience in leadership, the grace of a warm and caring heart, and a determination to carry out her work with excellence.”

Over the years, Sister shared her love of Christ with many. She made time to lead retreats and days of reflection that offered parishioners a welcome respite from the hardships of life. And “hardship” was an apt word in this California farming region with high unemployment, illiteracy and poverty.

A highlight of Sister  Barbara’s service in Stockton occurred when she and other members of diocese attended the canonization of Juan Diego Cuauhtlatoatzin, the first Roman Catholic indigenous saint from the Americas. Pope John Paul II presided over the ceremony, which took place at the Basilica of Guadalupe in Mexico City on July 31, 2002.

One of Sister  Barbara's favorite passages in scripture comes from the Book of Wisdom where we read, “Be aware of my presence, my concerns and my willingness to inspire and instruct you. As you meet with each other, I meet with all of you.” (Wisdom 6:12-17) Sister Barbara reflected those words when she wrote, “I find myself most grateful for all the relationships that are mine with God, with my sisters and with the people of God wherever I find them. My life of ministry is a response to the insistent call of Jesus Christ to open my heart and live in His faithful presence.”