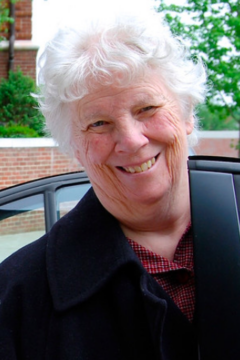 She received her B.A. in Education from Emmanuel College in 1966 and her M.A. in Pastoral Ministry from Emmanuel in 1976. She then took the Master Teaching program from the Archdiocese of Boston in 1969, and participated in the Conference on Women in Ministry at Emmanuel and the Creative Catechesis for Children program at Georgetown University.

Sister Bernadette was a committed educator, teaching at elementary schools throughout the state of Massachusetts. In addition, she was a guidance counselor at St. Joseph's school in Quincy, Mass. and a receptionist at St. Mary's in Lynn and Mother St. Joseph House in Wakefield.

Sister Bernadette Noonan passed away on December 10, 2022, after 68 years of consecrated life.

To make a gift to the Sisters in honor of Sister Bernadette, please click here.