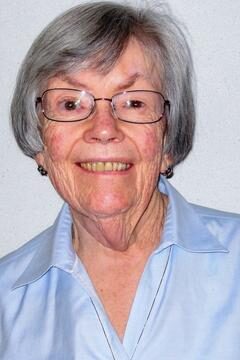 Sister Betsy Flynn (formerly Sister Mary Thomas) is the daughter of Thomas James and Mary Jane Hungerford Flynn. Her mother was widowed at a very young age. Betsy and her younger brother Tom grew up experiencing abundant love in the larger family of their grandparents and cousins. In this home, all contributed to the household income. The family had a paper route; Betsy babysat, and Tom was an office boy. They spent summers with their grandparents, who had a cottage at Short Beach in Stratford, Connecticut, where from an early age they learned to swim, fish, and moor boats.

Betsy attended Notre Dame High School in Bridgeport, Conn., where she first met the Sisters of Notre Dame. She was impressed, not only because they were excellent teachers, but also because they established relationships with the students. Her homeroom teacher in freshman year created a community spirit in the homeroom. The students had a project to send a package to a missionary sister, who then responded each month telling them about her work in Guatemala. These letters stirred in Betsy the desire to be a missionary.

Betsy was also a member of Sodality and participated in two Summer Schools of Catholic Action at Fordham University, adding to her enthusiasm for mission. Her Spanish teacher, Sister Veronica Therese (Sister Kathleen Earley), was part of the first group of SNDdeNs to go to Brazil. Betsy loved the letters from that first group telling of their experiences, which strongly stirred in her heart the call to go to Brazil. After making her first vows, she requested to be sent to the missions, but Sister Loretto Julia, the provincial, refused Betsy’s request, saying that her mother needed her in Connecticut.

Sister Betsy channeled her missionary spirit into her assigned ministries closer to home. She taught Spanish in Connecticut diocesan high schools: Central Catholic in Norwalk, East Catholic in Manchester and Notre Dame in Bridgeport. One summer, as part of an ecumenical team, with a minister, a labor organizer, and two lawyers, she taught English to tobacco pickers in the evenings. The workers came up from Jamaica and Puerto Rico each summer. The conditions of the camp in which they lived were rough, and they worked in the hot sun from dawn to dusk. The ecumenical team won a law suit against Shade Tobacco, which was then required to provide three hot meals a day for the migrant workers.

It was at this time that Betsy moved to the inner city on Main Street, Hartford, Conn., where she first became aware of the statement, “Where you live determines what you see.” Main Street was in the center of the north end of Hartford, and the community of Sisters worked all over the inner city. As a counselor at Greater Hartford Community College, Sister Betsy worked with Spanish-speaking women who wanted to return to school to increase their job possibilities.

In 1979, Sister Betsy had the special experience of attending the Celam Conference in Puebla, Mexico. Mujeres Para el Dialogo, a group of some fifty women from Latin America, Central America and the United States, came together in the hope of being able to be present as observers at this conference. The group was denied entry. An Alternate Puebla Conference was held each evening to share the events of the day’s meeting. Some bishops and theologians came to the meetings, including Bishop Oscar Romero, Ernesto and Fernando Cardinale, and Gustavo Gutierrez.

Following a 30-day retreat, Sister Betsy once again offered to go to Brazil, where she then ministered for thirty-four years. In 1981, after attending language school in Brasilia, Sister Betsy arrived at Sao Domingos, Maranhao, where she lived for a year. Then she moved to the state of Ceara in a time of intense drought. She first lived on the top of a mountain in the parish of Assuncao, Itapipoca. There she walked with a small team visiting all the small mountain base communities, where wealthy land owners fenced off the public reservoir, thus blocking the only source of water for these communities. In Itapage, one of the mountain communities, twelve babies died because of hunger and dehydration.

After Assuncao, Sister Betsy moved down the mountain to the city of Itapipoca, where she joined Sister Mary Alice McCabe, Father Albani Linhares and the diocesan team which accompanied base communities all over the diocese. The mission involved support for communities who had suffered for generations under the oppressive system of paying rent to the wealthy “so called land owners” who had, in fact, stolen documents from their ancestors. Dom Aloisio Lorscheider, Cardinal of Fortaleza, Ceara had participated at the Celam Puebla meeting in Mexico; he and Dom Paulo Pontes, the Bishop of Itapipoca, both spoke out strongly for land reform. They encouraged the communities to meet to discuss the results of the Puebla documents and then to share their ideas on the diocesan radio program. Communities wrote songs, poetry, and reflections on the meetings.

This was an exciting time for the land and for the women, who began to leave their kitchens and take an active role in the struggle to regain their rights to the land. The struggle cost dearly. It led to the death of a father and his two sons, who were brutally shot. From another community a farmer was decapitated while planting. These martyrs gave their lives for the life of the community.

In 1991, Sister Betsy moved to the capital city of Fortaleza where she lived with the Canadian Sisters, Our Lady’s Missionaries, in a land occupation in the city. At this time she worked with Nosso Chao, a communications center which produced documentary films on community issues. She lived in an Indian aldea for three months and helped them produce a video on the problem of alcoholism in the community. Years later, when the problem became more acute with the youth, twelve representatives came to Fortaleza to spend a weekend at a Drug Clinic. They did the interviewing and produced their own film to use with communities.

In 1993 a formation community was established in Fortaleza. Four Sisters shared community in a land occupation on the other side of the city. Their work with the women continued. In 2000, together with women in the city, they created an ecumenical group called AGAR. This group met to study scripture and share stories. In September of 2015, they celebrated fifteen years and created a logo: “Women united, constructing paths of freedom.” They prayed, danced and sang, celebrating life in abundance.

Sister Betsy left Brazil in 2015. She now lives at Julie House in Windsor, Conn., but her ministry with those in poverty continues. She joins with SNDdeNs and others in serving frequently at the US’s southern border, providing support for those just arriving by helping them tell their stories and reasons for seeking asylum in the states. They have risked everything to come, because their lives were in danger if they stayed in their countries.

Betsy also volunteers as a Portuguese interpreter at Malta, a health care clinic in Hartford, Conn. for those who have no other recourse to obtain medical help. She also attends court sessions for immigrants, lending visible support for these new arrivals.

As Sister Betsy reflects on her diamond jubilee, she looks back over her life and is deeply grateful for the abundance of love she has known. She celebrates her many blessings, knowing in a tangible way that God is indeed very good!