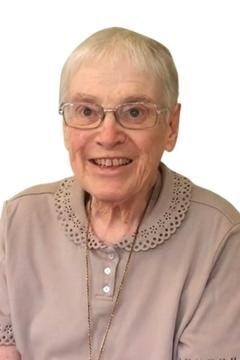 Sister Catherine Griffiths was born Beverly Marie Griffiths, the eldest child of Kate and Andy Griffiths, both immigrants from Newfoundland, Canada. Sister Catherine describes her younger years in this way: "My three younger brothers and I grew up in a very Irish, 'Newfy' Catholic family. Our lives centered around the church which was nearby. I played the organ in church. My brother Andy was an altar boy and Jim and David were in the choir. We all went to Catholic Schools.

"We were real city kids, having grown up in Cambridge halfway between Harvard and MIT. My dad was a fisherman and was gone fishing for nine days and home for two. In between, he stayed home every four trips. I cherished the time he was at home. Mom loved Irish music and it rang through the house most days." Her mother had bouts of poor health, so Sister Catherine often felt like a mother to her youngest brother and it was difficult to leave him to enter the convent. However, she felt that if she didn't leave when she did in 1952, she would never go. She chose the name Sister Catherine St. Andrew in honor of her parents.

She knew from age seven that she wanted to be a Sister, saying "I knew that whatever I did in life I would do as a Sister and it came true." Though she considered another order, she loved the way the SNDdeNs she knew interacted with each other and says "I felt something of God from them. I desired to give my life to God as they did even though I'd never thought of becoming a teacher. Somehow, God led me to Notre Dame. for which I am ever-grateful."

Her first mission was to teach fourth grade at Assumption School in East Boston. "I had 53 pupils," she says. "Fifty-two little Italian children and Charlie O'Brien." She remembers the boys in the class getting up to look out the windows at the planes coming and going from Logan Airport, saying, "I didn't have a lot of discipline but the Sisters who taught with me were wonderful, helpful and encouraging." She came to enjoy teaching and remained in the classroom for some years but changed paths when she started suffering severe migraine headaches. From then on, she was primarily involved in parish and retreat work and spiritual direction.

She loved all her ministries, but the one that has meant the most to her was her direction of 30-day retreats for novices of the Society of the Divine Word. "It was a grace and blessing to walk with these young men preparing for lives as missionary priests and brothers," she says of her nearly 20 years of service in that role.

Asked what she would say to people who are considering religious life, Sister Catherine has this advice: "Listen gently and pray to be open to wherever God is calling you. Have a good sense of humor and don't take yourself too seriously." And during times of difficulty, she has hope, because she trusts the presence of God in our lives.

At this time of her Jubilee, she reflects that, "I'm deeply grateful for God calling me to Notre Dame to serve God and others. I'm also grateful that God called me to deeper intimacy with him 70 years ago."

To make a gift to the Sisters in honor of Sister Catherine's Jubilee, please click here.