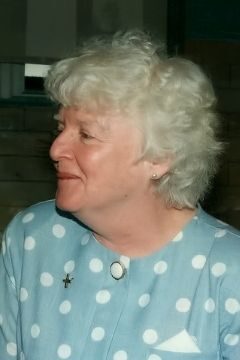 “How good is the good God!”

Sister Christine Julie McGuirk had a happy childhood. She grew up in Cambridge, Mass., with her large family. She was one of a set of identical twins, but the family had another set of twin girls, another girl and a two boys. All are still living except for her twin.

Her family was very active and well-known in their parish of St. Mary in Cambridge. She attended St. Mary’s Catholic School through 12th grade, though her brothers went to a Jesuit high school.

Christine started thinking about becoming a sister when she was in the seventh grade, and remembers that the sisters gave vocation talks. People thought that her sister  Patricia would be the one to enter religious life—or really any of her sisters—except for Christine! But Christine is the one who joined the Sisters of Notre Dame de Namur as a postulant on August 1, 1951, in Waltham, Mass.

Christine’s first assignment was to teach 50 fifth grade boys at St. John School in Peabody, Mass. She loved the group, although the class was not generally well-behaved. Christine was so new at teaching that she didn’t recognize that the boys were naughty. A sister worked with Christine to help her with discipline. By her second year of teaching her classroom discipline was better and continued for improve.

In time, Christine taught seventh graders and then high school girls. Eventually she received her last assignment— to teach biology at Boston College High School (BC High), a Jesuit school for boys in Boston. When Christine first taught at BC High, she was one of only two women on the faculty. Since that time the number of women teaching there has increased. Christine loved her 20 years of teaching at BC High; the Jesuits were helpful, and the students were well behaved.

At the time of her 70th Jubilee, Christine expressed that she is especially grateful for the Sisters of Notre Dame de Namur—for knowing them, living with them, and celebrating with them.