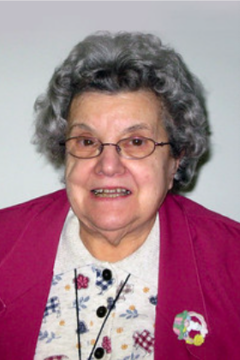 Who shall find a valiant woman, her value is beyond pearls.
Those who entrust their hearts to her have an unfailing prize.
She brings to all who know her good, not evil, all the days of her life.
She is girt about with strength and sturdy are her arms.
She enjoys the success of her dealings. …
Give her the reward of her labors,
And let her works praise her at the gates.
– Adapted from Proverbs

This adaptation from Proverbs which Corinne used at her mother’s funeral, was placed on her own memorial card. Corinne, indeed, was a valiant woman.

Peter and Catherine (Romano) Manzi welcomed their only daughter into their West Philadelphia, Pennsylvania home and with her brother, Donald, they formed a loving family.

Corinne met the Sisters of Notre Dame de Namur at West Catholic Girls’ High School. On the occasion of her 70th Jubilee she wrote: “I was mesmerized by their joy and simplicity.”She entered in 1948, telling herself that she’d stay a short time—“just long enough to get the idea out of my system.”

For 23 years, Sister Corinne dedicated herself to teaching and school administration. She taught in all three of the SNDdeN schools in the diocese of Brooklyn, New York, and served in administration at the then Trinity Lower School in Ilchester, Maryland, St. Francis Xavier in Washington, D.C., and at Holy Trinity School in Glen Burnie, Maryland. During these years, she completed her first degree in English and French as well as a master’s degree in Administration and Curriculum.

Recognizing the growing need for religious education, Sister Corinne became professionally certified and in 1974 became Director of Religious Education at St. Nicholas Parish in Virginia Beach, Virginia. She spent the next 12 years in similar roles in Baltimore and Norfolk, Virginia parishes.

Called in 1986 to be the Archivist for the Maryland Province, Sister Corinne energetically pursued training in this new field of endeavor. Although not attracted to the work, she recognized its importance and for the next three years directed her energies toward preserving and updating the history of the province. Given her energetic spirit, Sister Corinne was also able to continue Religious Education ministry at St. Michael Parish in Mt. Airy, Maryland.

After a year of sabbatical at Boston College, Corinne continued in Religious Education at St. Francis de Sales Church in Salisbury, Maryland. In 1996 until 2006 Corinne served as the Chesapeake Province Archivist, managing to keep her “toe” in religious education at St. Benedict Church in Baltimore.

Corinne spent her last years at Maria Health Care Center where her physical needs were excellently attended. She learned her way around the computer and kept up with all the news of the day. She wrote: “Now I find myself wondering how I can gratefully and joyfully make a return to the Lord for this love and care!” That her gratitude was joyful goes without saying. On October 28, Corinne succumbed to COVID-19.

We bid farewll to a much-loved valiant woman of joy.