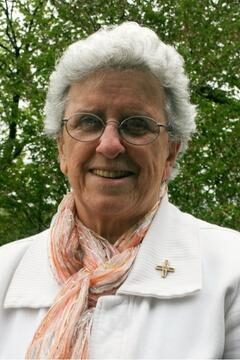 “My soul proclaims your greatness, O God! My heart rejoices in you, my Savior, because you have showered your servant with blessing!”

I am the tenth child born into a family of six girls and six boys. We all went to the local Parish school staffed by the Sisters of Notre Dame. Throughout high school I fought the idea of entering the Sisters of Notre Dame. In those days, a Sister would ask, “Have you ever thought of entering the convent?” I would always think yes and answer no. In the middle of my sophomore year in college, the thought became more persistent and I had to pay attention to it. Midway through that year, I reconnected with the Sisters and decided that I would enter. I entered in Waltham, Mass. on February 10, 1959, and here I am in 2019 celebrating 60 incredible years as a Sister of Notre Dame de Namur.

I was missioned to Brazil in 1968 and that changed my view of the world, the church and religious life. I learned to speak Portuguese, live in another culture and read the bible from a different perspective, that of the poor. This was a time when, after Vatican II, missiology was changing and the Bishops of Latin America, especially Brazil, took a leading role to bring a new pedagogical process to the local Churches. The formation of Small Christian Communities became the driving force of a renewed church. I was blessed to have been part of this.

At this time of Jubilee “My soul proclaims your greatness, O God! My heart rejoices in you, my Savior, because you have showered your servant with blessing!”