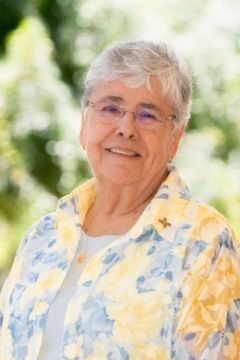 For I know the plans I have for you, declares the Lord, plans for welfare and not evil, to give you a future and hope. -Jeremiah 29:11

Priscilla Jo Coonis met the Sisters of Notre Dame de Namur as a first grader at St. Columbkille School in Los Angeles. She loved the school, loved the spirit and loved the Sisters. “There was no doubt in my mind that I was supposed to become a Sister of Notre Dame de Namur, but I never thought I would stay; I thought I just needed to be able to say, ‘I did it, and it wasn’t for me.’ Well, here I am 60 years later…I guess I was meant to stay!”

Priscilla took the name Georgianna when she became a Sister. As a young SNDdeN, Sister "Georgi” taught in elementary schools in Salinas, Santa Clara, Covina and Honolulu. While at Holy Family Catholic Academy in Hawaii, she learned the ins and outs of school administration from Sister Noreen Cain, then principal of the school.

Later, this learning would be put to good use at several California schools, including her ten years as principal at Notre Dame School in Santa Barbara. Sister Georgi confesses that she never wanted to go into school administration until she realized that she didn’t need to change who she was: “I’m still just me, but now in charge.”

During the 1990s she used her administration skills to direct the “I Have a Dream” program at James Flood School in Menlo Park, California. The program’s goal was to give students from challenging circumstances the opportunity to go to college. Though they faced overwhelming odds, with Sister Georgi’s loving support most of the “dreamers” did graduate from college and are now employed.

During the years that Sister Georgi served as principal at Resurrection School in Sunnyvale, peace was the guiding theme. She said then, “I tell each child, ‘You don’t need to like everybody, but you do need to be respectful of each person.’” She stepped down from that job when she was asked to serve on California Province Leadership Team; she now is one of the support coordinators for the Sisters in the West Region of the U.S. East-West Province.

Sister Georgi shares, “I am really blessed and I know it!”

To make a gift to the Sisters of Notre Dame de Namur in honor of Sister Georgi, please click here.