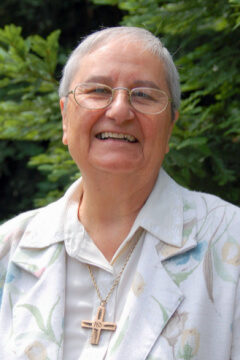 Gertrude Boracca, SNDdeN, lived in a home that was in the midst of apple orchards.

She attended Watsonville High School and after graduation—with the goal of becoming a P.E. teacher—she enrolled at Hartnell College in Salinas, Calif.

It was there that one of the teachers told Sister Gertrude that the Sisters of Notre Dame de Namur were looking for someone to teach the 7th and 8th grade girls at Palma School in Salinas.

At first, Sister Gertrude hesitated, saying that she hardly went to church. She was persuaded that that wouldn’t make any difference.

The job turned out to make a huge difference in her life.

As Sister Gertrude worked with the Palma girls, she got to know Sister Mary Wildred and Sister June Canoles. She had no idea then that Sister June had commented to another Sister, “That girl has a vocation,” but the Sisters began to loan her books and invited her to go on a picnic with the girls to the novitiate in Saratoga.

She remembers, “I saw the novices outside playing ball. They seemed so happy together, which got me thinking that I’d like to be part of a group like that. I made an appointment to visit and talk with the Provincial.”

Gertie entered the novitiate and for nearly 20 years she enjoyed teaching children in Notre Dame elementary schools from Los Angeles to Portland, Or.

She later coordinated religious education programs for the Monterey Diocese while serving on the staff at Notre Dame House of Prayer in Carmel, Calif.

When a good friend and co-worker became ill with cancer, Sister Gertrude accompanied her friend through diagnosis and treatment and, finally into hospice care. Touched by this experience, she volunteered with hospice and learned the value of a comforting massage for those who were seriously ill and dying.

Sister Gertrude served several years at Notre Dame Villa at Our Lady of Fatima Villa in Saratoga, Calif. and for 20 years at the Sisters of the Holy Family Care Center in Mission San Jose. She cared for the Sisters who were seriously ill. They trusted her as she listened to them, usually while massaging their hands or feet.

Sister Gertrude is now retired and receiving care—much as she was able to care for others.