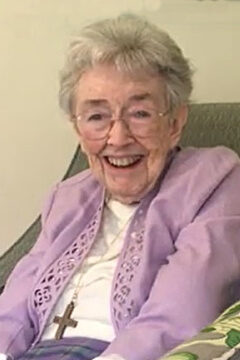 Sister Immaculata was named Mary by her parents Thomas and Mary (Moran) McDonnell at her birth in Boston. “I was very fortunate,” she says. “I had parents who were deeply religious and we had a happy family. We prayed every day together, and from the time we were children prayed that if it were God’s will, we would have vocations.” Of the three McDonnell siblings, she and her brother entered religious life. And Sister was called Mary by her parents for a reason: “Our Lady had a very important place in our home. She guided us,” explains Sister Immaculata.

Mary’s education began at a school in Hyde Park, where she was taught by the Sisters of Charity of Nazareth. And Mary’s mother had much love and gratitude for the Sisters of St. Joseph who had helped her after her own parents had died when she was young.

But when Mary attended Notre Dame Academy, Roxbury, she found her community in the Sisters of Notre Dame de Namur. “I loved the Sisters from the beginning and entered religious life right after high school,” she says, “and I’ve been very, very happy.” Entering the novitiate in 1947, Mary chose the religious name Sister Immaculata Marie.

Sister Immaculate loved teaching, and she was missioned to schools in Hingham, Mass., Providence, R.I., and Dorchester and South Boston, Mass. Later, for many years she supervised the transportation of Sisters in Ipswich, Mass.

Sister Immaculata has always had a welcoming spirit. At times during her life in ministry she lived with Sisters who were in formation. “We wanted them to know how much we loved being Sisters,” she says, “and we hoped and prayed that they would, too!”

Sister Immaculata lives in community in Ipswich, Mass. Asked what makes her happy in her day-to-day life, Sister responded, “It’s hard to say what makes me happy because I AM happy. God has been very good to me and God has given me the privilege of living with these Sisters, of becoming one of these Sisters, and He might ask something that’s a little difficult … but He’s there!”

Of her Jubilee, Sister Immaculata said, “75 years a Sister! And I loved it! I can’t do as much as I used to, but God was always very good. When I had a few little bumps along the way, the Sisters were there. I have always tried to be what I felt God wanted me to be.”

To make a gift to the Sisters in honor of Sister Immaculata's Jubilee, please click here.