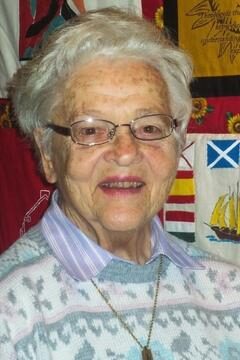 Janet Cahill, SNDdeN, grew up in a family of six. Her father was a traveling salesman and part-time football official, and while he was away her mother held down the fort in the Philadelphia suburb where they lived.

Sister Janet appreciated her parents’ loving relationship, and always felt that they understood her.

Her first encounter with the Sisters of Notre Dame de Namur was in school at Notre Dame High School in Moylan, Pa.

Janet’s neighbors and classmates were convinced that Janet would choose religious life because they saw her going into the local church so often. Little did they know that her visits there were to pray for the success of her basketball team!

Though she was small, Sister Janet was athletic—as was her whole family—and she used her trademark “left-handed crook” shot to great effect.

During her senior year of high school, the Notre Dame Moylan basketball team was undefeated and the champion of the Diocese of Philadelphia. Sister Janet vividly remembers playing at a big game in the municipal stadium in downtown Philadelphia, and being surprised to see her father in the stands—he had interrupted his work travel schedule to come see her.

Sister Janet had no particular interest in marrying or motherhood, and felt drawn to become a Sister. There were other religious congregations that she could have entered, but she particularly liked St. Julie’s plan to “… go where the need is greatest.”

She also did not want to be under the control of a local bishop.

Sister Janet decided to delay her entry for a year to “see the world,” but in 1952 did go to the novitiate in Ilchester, Md. She adopted the name Sister James Adele in honor of her parents.

She missed her family terribly, but was grateful that even though her siblings had busy lives and children to care for, they were very good about visiting her.

At the time of her 50th Jubilee as a Sister, Sister Janet hosted a family reunion to thank them.

Throughout the years, she occasionally impressed her young students with her basketball skills.

In one of her early ministries, the Superior of the convent was very strict and formal, and Janet was quite unhappy when she learned that their regular recreation time was to be spent weeding the garden!

At that same parish, the local people had very little money, so to cover the school fees for their children they would slaughter cattle and pay in beef.

“We had filet mignon every night for supper!” says Sister Janet.

In 1988, Sister Janet began 26 years of ministry at St. Jerome School in Hyattsville, Md. She chose St. Jerome because it had been a Notre Dame school from its founding in 1944. “I wanted to end my teaching career in an SNDdeN school,” she explained. When her advancing age made it a challenge to spend all day teaching in the classroom, Sister Janet shifted her focus to supporting students in small reading groups, and she also worked with pre-schoolers. She has many memories of events and contact from former students that made her feel that she was making a positive difference.

While at Sr. Jerome's, Sister Janet had a strong impact on the children, community, and staff. Her faith-based positive personality opened children’s and adult’s hearts to receive her message. Sister prepared children to receive the sacrament of First Communion for many years. She also implemented a home visit program, which she felt helped her to know her students better and thus direct her plans for teaching them. Sister Janet was highly respected in the Hyattsville community and definitely followed St. Julie's path in spreading the message: "How good is the good God!"

Reflecting on her varied experiences over the years, Sister Janet says, “God does not hurry up stuff. He takes a long time to have things work out, but when they do work out, there’s no taking back, and that’s how I feel about my Lord that I’ve served for 70 years.”

Sister Janet now lives in Worcester, Mass. at the Notre Dame Long Term Care Center. She is an active participant in the activities offered for residents, and she watches CNN because she likes to know what’s happening in the world. She remains a devoted fan of the Philadelphia Phillies and the Eagles, despite the teasing she gets while living in Patriots country!

To make a gift to the Sisters in honor of Sister Janet's Jubilee, please click here.