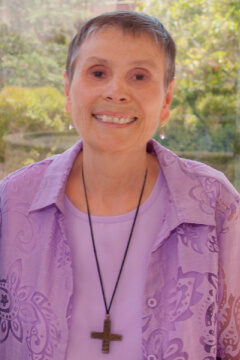 In the first of sixth grade, Sister Joan Bernhart, SNDdeN, remembers Joan saying, “You are going to be a Sister.”

As a student at Notre Dame High School, San José, Sister Joan admired Sisters who were young, vibrant and dynamic teachers with a sense of humor and freedom of spirit.

Sister Joan entered the postulate at Saratoga, Calif. after graduating from NDSJ. With an aunt already a Sister of Notre Dame de Namur and a cousin in another community, Joan’s decision was not a surprise in her family. 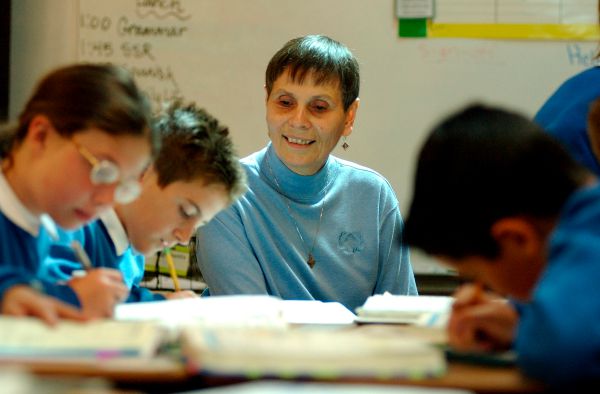 Sister Joan taught at Dolores School, Santa Barbara, and in Carmel, Calif. and Saratoga before being assigned to Notre Dame School in Chico, Calif.

“Chico was beautiful,” she remembers. “The place, the people and the children, so real in their simplicity and joyfulness. There were picnic dinners alongside the creek in Bidwell Park when the indoor temperature of the convent ranged in the 90s. Special treats included Sunday afternoon drives into the mountains and an annual trip to a small cabin on the icy, snow-covered shores of Lake Almanor. A Swiss-born neighbor, Charles, was there on his skis whenever the Sisters needed help to dig out the car.”

Crisis can be a surprise that brings blessing. Leaving elementary education, Sister Joan taught at Notre Dame High Schools in Belmont, Calif. and San Jose, Calif. However, increasing health problems and an eventual diagnosis of multiple sclerosis made a quieter ministry a better choice.

The Business Office at the College of Notre Dame was just that—"an opportunity to be with people, to be supportive and of service.”

After 16 years there, she became a teaching assistant at Notre Dame Elementary School in Belmont.

These days, retired for the second time, Sister Joan is a treasured member of the community at the Province Center. Sister Joan’s ministry today is “kindness, prayer and presence.”

Jean Howe, former community coordinator, says, “One of the most powerful things about Joan is the way she deals with MS and the obstacles it sets before her. She has a gentle way with a sweet smile and is strong and courageous.”

Looking back over more than 60 years as a Sister, Sister Joan reflects on her life where everything has been a gift.

"I want others to know that God is with us in all the ups and downs of life. God loves us.”