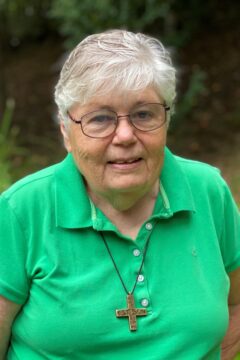 Kathleen O’Hagan grew up in Drexel, Pennsylvania as the oldest of three children. She recalls her childhood as wonderful, with special ties to her aunt and uncle, and feels deeply connected to her Irish heritage. She attended public school up until fifth grade when she was happy to transfer to a Catholic school where religious instruction would be included during the day and wouldn’t take away from her playtime!

While at St. Bernadette’s for middle school, she had Sister Anne Therese, SNDdeN as a teacher who pushed her academically after being allowed to ‘share answers’ among her gang of friends while in public school. This exposure to the Sisters of Notre Dame de Namur through eighth grade was a wonderful experience, Sister Kathleen shares. Yet, she originally thought about joining the Sisters of Mercy so that she could get to Ireland, but finally realized that was not a good enough reason to join that congregation.

“I love Saint Julie,” said Sister Kathleen when reminiscing over middle school memories. “In seventh grade, I was getting clothes ready for kids in need, and I had never thought about not having enough and the Sisters made me aware of that. I like the spirit of the Sisters of Notre Dame de Namur.”

Sister Kathleen’s first mission was to St. Ursula School, located in Parksville, Maryland. She loved the school, the children, and the neighborhood. “When the riots came,” she says, “the Sisters were helping out to deliver things before the military shut [the city] down.” Ultimately, the Sisters were stopped from reaching the people because the parish priest wouldn’t let them use the car. It was at that point that Sister Kathleen decided she didn’t want to work in a parish setting where she could be restricted from helping her fellow Sisters and people in need.

Later, Sister Kathleen spent time in Queen’s Village, New York City, helping those in the inner city. She worked at Martin de Porres, an alternative school, where they served many ‘latch-key’ students whom they would pick up from home in the morning to bring to school. It was there that she also had interactions with the Black Panthers. It was a revolutionary and charged time in the country, after the assassination of Rev. Martin Luther King, Jr., and she had many conversations with her students about non-violent representation. A highlight was when her third-grade class wrote coloring book companies to get more diverse representation in their books. She heard back from three and the rest is history, as you can see how much more inclusive the books are today.

While she felt that she had done good work at Martin de Porres, after six years she was ready for a change. After reading the pastoral letter: This Land is Home to Me: A Pastoral Letter on Poverty and Powerlessness in Appalachia from the Catholic Bishops of the Region (1975), she knew she had to go to the mountains of West Virginia. She had heard that Edwinna Pepper was starting a land trust and a school, and she thought it would be an opportunity. The Sisters in leadership told her that she couldn’t go by herself. Fortunately, she heard that a Sister of Saint Joseph might want to go. While on retreat in Ilchester, Maryland, she hopped on a train to Wheeling, West Virginia, and met Sister Gretchen Shaffer, CSJ. They found a commonality of purpose and mission and discussed creating a school. Sister Kathleen said, “She was experienced with intermediate and upper grades, and I was experienced in lower to intermediate grades.” It would prove to be a perfect partnership.

The early years in West Virginia at the Big Laurel Learning Center in Kermit, West Virginia, were challenging. The center is located on the Knob, a mountain community. Sisters Kathleen and Gretchen started their ministry by teaching in a woodshed with a wood-burning stove for warmth. “It was rough!” said Sister Kathleen. “I guess I was a suburban girl, and I didn’t like walking my breakfast off for two miles in the morning, so I bought a pony horse, two hands shy of a regular horse, and rode him to school.” Later she used him to motivate the kids by letting them take him home when they earned points with their readers.

The time at Big Laurel kept unfolding and the ministry changed to meet the times and the needs of the community. A food pantry was added, and a summer bible school was started. “After several years, the tightknit community trusted them and knew they were there to do good and not just convert people,” said Sister Kathleen.

Over the years, groups started coming to do service work. They came from parishes and colleges and would help repair broken-down trailers or build porches. Many of these groups, now friends, still come to help and have been doing so for over 30 years. With all the volunteers, they ended up building a bunkhouse, and all the while it felt like what God wanted.

As time went on, she ran the summer camp at Big Laurel with help from other Sisters and then felt called to study addiction counseling and mental health. “It took me two years and I worried I couldn’t pass the test since I’m not a good test taker,” she said. Taking the final test on St. Patrick’s Day, she indeed found the luck of the Irish and passed with one point over what was needed. She later got her masters and worked for nine and a half years in mental health counseling. Sister Kathleen now works with addicts at a suboxone clinic. She was inspired to help people with addiction due to losing her nephew to addiction and being in recovery herself. She shares, “I want to help people not to die. I can share my experience, strength, and hope.”

At this time of her Jubilee, Sister Kathleen reflects, “I am grateful to the Sisters of Notre Dame de Namur and my companion, Sister Gretchen. I get more than I give, especially from the children.”

What gives her hope is the young people who come to work through the Notre Dame Mission Volunteers, sharing, “They know how to balance priorities. I have great hope in their enthusiasm about the environment and bravery in how they must face the future.”