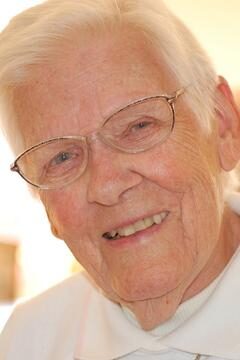 Loretta Olsen was a gifted artist, teacher and leader.

She planned to become a Sister when she graduated from Notre Dame High School in Belmont; a Maryknoll sister. But God had other designs for her and Loretta realized that her destiny lay with the Sisters of Notre Dame de Namur who had so wonderfully educated her for years.

During her career Sr. Loretta would move between teaching assignments (including at St. Mark's in Seattle, Madonna School in Salinas, and Sacred Heart in Saratoga) and serving as an infirmarian for the SND community. Later she would become superior at the Notre Dame Villa Infirmary in Saratoga.

Sr. Loretta's love for the contemplative aspect of life drew her to the House of Prayer movement in the early '70s and later during the '90s she would serve on the HOP staff in Carmel.

A gifted artist, Sr. Loretta was also described as a "caring and loving woman who has held nothing back from giving her all to our good God for these past 70 years!" Sister died in 2013.