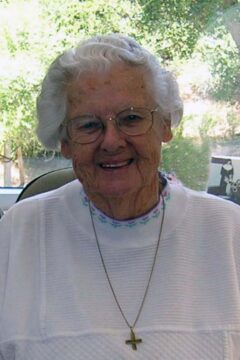 Sister Marie Elise, a Sister of Notre Dame for 76 years, died surrounded by family and Sisters in Oakland, CA, on July 21, 2013.

Born Elizabeth Clare on September 3, 1919 to James McCormick and Mary Graham, she was the youngest of five children (Graham, Catherine, Patricia and Richard).  Home was her beloved Butano Canyon, still the gathering place for the McCormick clan.  Like all good Irish, love of family and a strong faith sustained her.  “Sister Beth,” as she was affectionately known, was particularly fond of chocolate and animals, especially dogs!