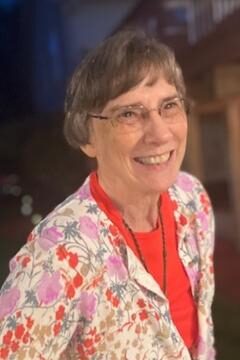 “Of his fullness, we’ve all had a share, love following upon love.”

“Let everything happen to you: beauty and terror."

Rainer Maria Rilke,
“Go to the Limits of Your Longing.”

It is ironic, then, that she never met the Sisters until she was in college.

Sister Mary was born in Medford, Mass., the youngest child of five and the only daughter in the Boretti family.

Her parents were first-generation immigrants (from Italy and Belgium), and both were religious. The Italian culture was predominant in her family, and she grew up with “family, faith and good meals.”

During her childhood, Sister Mary attended St. Joseph’s School in Medford, Mass. which was directed by the Sisters of St. Joseph—as was her high school.

During those early years, Sister Mary remembers loving Bible stories, helping at church, singing in the choir and being drawn to the mystery of the lives of the Sisters of St. Joseph.

While she lived in a lively neighborhood filled with children, Sister Mary was very uncomfortable with the conflicts and disagreements she witnessed and experienced. At school, Mary heard the stories in the Bible with messages of kindness, love, understanding and forgiving, and she felt that Jesus had the answers she wanted.

Growing up during the turbulent sixties, Sister Mary was greatly influenced by the social questions of the Vietnam War's rightness of the growing Civil Rights movement. Sister Mary attended services at the Paulist Center in Boston and joined in anti-war rallies on Boston Common, all the while being drawn to the nonviolent message of the Gospel.

Sister Mary remembers walking home on a beautiful fall day and being flooded by an overwhelming sense of boundless love and goodness. And she felt that it was too much to be contained in one nuclear family and that she needed to pour it out and give it all to God.

Therefore, during her senior year at Matignon High School in Cambridge, Mass. Sister Mary visited her seventh-grade teacher from St. Joseph’s to inquire about entering the Sisters of St. Joseph.

To her surprise, she was told they weren’t accepting new members because of the many changes happening within the congregation at that time.

Though disappointed, Sister M ary was accepted at a college with a plan to major in education. She was planning to live on campus, but her mother died in August 1969.

With her older brothers either in the military or with families of their own, she didn’t want to leave her father alone. So she went to Salem State College (now University), attending night classes during her first semester, until she could be accepted into the day classes in January.

Sister Mary's longing to enter religious life continued and she met several young Sisters of Notre Dame de Namur who came from Ipswich for their own training in education at Salem State. This acquaintance led her to inquire about joining the congregation.

Sister Mary entered in 1972, one of a band of four affiliates, and commuted to Salem State to complete her senior year.

After a year of canonical studies, she was sent to teach junior high students at St. Mary of the Annunciation School in Danvers, Mass. Having been influenced by the Sisters of St. Joseph, Sister Mary had always thought that she wanted to be a teacher, especially of junior high students, but found the work challenging.

When she made her final vows in 1979, Sister Mary considered the Sisters’ commitment to the poor and asked to be sent to a school that served students from low-income families. She was assigned to teach at Blessed Sacrament Elementary School in Cambridge, Mass.

Those years were even more challenging. While she loved learning and was drawn to the spirituality of St. Julie, she realized she didn’t love teaching.

“I loved the kids in both places,” she says, “but not the classroom.”

At that time, she made a retreat where she heard of a Master's program at Duquesne University which focused on Adrian Van Kaam’s approach to spirituality. Her interest in the connection between the human and spiritual journey had been growing and she found this was just what she had been searching for.

After completing her masters degree from the Institute of Formative Spirituality at Duquesne in 1982, Sister Mary worked for a year as a campus minister at Cardinal Cushing Central High School in South Boston.

Through her dear friend Sister Therese Julie Fitzmaurice, she learned that Our Lady of Sorrows in Birmingham, Ala. was looking for Sisters to begin a Spiritual Life Office in the parish.

Between 1984 and 1989, Sister Mary and Sister Therese Julie began spiritual development programs for the parishioners ranging in age from junior high through adulthood.

Upon returning to Massachusetts to help care for her then-elderly father, Sister Mary was asked to teach English to adults at the Julie Education Center and at the same time work at the House of Hope, a family shelter in Lowell. She found each a rewarding experience.Sister Mary had always been drawn to accompanying people in their own spiritual/human journey, helping them to recognize God in their midst and to come to know God more fully. She earned a Certificate in Spiritual Direction from the Center for Religious Development in Cambridge, Mass. in 1997 and shortly after began spiritual direction and retreat ministry at Eastern Point Retreat House in Gloucester, Mass.

During the mid-1990s she had been asked to serve as province novice director, so in 2001 when three women who entered Notre Dame were ready for the novitiate, Sister Mary left Eastern Point to become novice director and to establish what became a collaborative novitiate for three SNDdeN provinces until the decision was made to begin a USA National Novitiate. In 2007, she was elected to leadership for the then-Ipswich Province.

In 2014, as her term in leadership ended, the position of director for the Notre Dame Spirituality Center opened. She applied and was selected for the role, joined soon after by Sister Ellen Keane as co-director. The Spirituality Center now hosts many groups of many different religious traditions and offers a variety of programs, both in-person and remotely via Zoom—a practice developed during the COVID-19 pandemic.

Relationships bring Sister Mary the deepest joy—relationships with her family, with God, with friends and with her Notre Dame Sisters, Notre Dame Associates and others that have become part of her life.

In this video, recorded at the time of her 50th Jubilee, Sister Mary reflects on her years as a Sister of Notre Dame de Namur:

To make a gift to the Sisters in honor of Sister Mary's Jubilee, please click here.