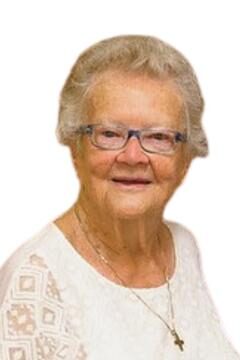 Sister Mary Mulligan was born in Dorchester, Massachusetts, and lives there today, but she likes to say that she’s been on Broadway for almost all her life. In this case, she’s referring to West Broadway in South Boston, a place where she studied, worked and lived for many decades.

Her parents, Anthony and Anna (Sullivan) Mulligan were immigrants from Ireland who eventually had eight children—four boys and four girls. Many of the siblings, including Mary, attended nearby St. Mark’s parish school, where they were taught by the Sisters of Notre Dame de Namur.

Sister Mary describes her parents as very faith-filled. “Their religion meant a great deal to them,” she says, “even though they had gone through some hard times in Ireland their faith was very strong … and we all were very groomed in the fact that our faith was very important. I often heard that whatever happened was God’s will.”

Mary was among the first students to attend the newly re-opened Saints Peter and Paul High School on West Broadway in South Boston. The school grew, and years later it was renamed Cardinal Cushing Central High School for Girls (CCCH. While in high school she never imagined that she would return there for most of her religious life.

She entered the congregation after graduating from high school in 1947, taking the name Sister Anna Marie. She became a teacher of English and literature, earning a bachelor's degree from Emmanuel College and a master’s from Boston College, both in English.

Asked what led her to become an SNDdeN, Sister Mary replied that she “Entered with the faith of my parents, their good example… and also because the Sisters of Notre Dame that were teaching at that time exemplified a strong faith and a dedication to the teaching they were doing. It was a divine call, but it was lived out in the lives of those Sisters. … We grew to know the Sisters in their lives as our teachers but also as human beings. They were willing to listen to us and encourage you if you felt that you, too, wanted to join this group that seemed very happy in their dedication in Notre Dame and in teaching.”

After teaching at St. Gregory School in Dorchester and St. Mary High School in Cambridge, Sister Mary was missioned to her alma mater, CCCH. In time she was called upon to be principal. “My mission there was truly a happy one,” she says of her 38 years at CCCH.

“I loved it!” she declares. “I loved the young women who came there, and I tried to have the ability to have them know that God is good, and that God really loves them very much. And even when we disagreed—sometimes we did—I always said to them ‘Don’t leave the building before going home,’ after we were having a little spat. ‘I want to see you before you go so we can say ‘Tomorrow is a new day.’” Sister Mary treasures the relationships she developed with students and was delighted when, on the occasion of her 90th birthday, she received many surprise visits from CCCH alumnae.

She was living at the CCCH convent on West Broadway with close to 50 other SNDdeN at a time when the Congregation was asking the Sisters to be more present to people who have been made poor by circumstances beyond their power. So, Sister Mary and two other SNDdeNs moved out of the convent and into the D Street Housing Project, also on West Broadway and not far from CCCH.

Since the Sisters living at the project had more time available during the summers, they asked families what they could do to help them. Beginning in the early 1970s, every summer the Sisters ran a “Fun in the Sun” program for children ages three to 13, using the facilities of public schools on site. “It was a hoot!” says Sister Mary, “A real hoot! … and it was truly holy, because we were dealing with kids and they were just marvelous!” When the Sisters moved out of the projects after about 30 years, the summer program was taken over by the local community center and it is still active.

CCCH was closed in Spring 1992, part of an ongoing trend in consolidating and shutting down Catholic schools. But in the fall of the same year, the Sisters opened a new school at the CCCH site. For years, Sister Mary taught English to adult students at Notre Dame Education Center (NDEC) who were working to complete their high school graduation requirements.

After retiring from teaching at the Notre Dame Education Center, Sister Mary enjoyed volunteering at Boston Home, which serves adults with advanced Multiple Sclerosis and other progressive neurological disorders. Drawing on her background as a teacher of literature, Sister Mary would read short stories and poems, then discuss their meaning with the residents who attended the sessions. She enjoyed it, but in 2020 halted her work there due to concerns about the COVID-19 virus and risk of exposing her housemates and residents of the Boston Home to it.

Sister Mary is still in good health and is grateful that she is able to live in community at her age, rather than at a health care facility. She is an avid reader and doesn’t miss an issue of The Boston Globe or Commonweal Magazine.

Sister Mary’s favorite quote from St. Julie Billiart is, “The good God is so very, very good.” “I do believe that God is good,” she says, “and that St. Julie believed in me to become a Sister of Notre Dame and for me to be able to see the goodness in each person as much as I can is what has moved me forward in my own faith and in my own perseverance.”

On the occasion of her 75th Jubilee, Sister Mary says, “I am very grateful that I was missioned to where I was missioned to teach the young women that I taught and to know also that I had the courage to move into the D Street Housing Project and grateful for the summers spent with children with ‘Fun in the Sun.’ It kept me young and kept me grateful for the goodness of people that I saw and that I witnessed and for which I was very appreciative.”

To make a gift to the Sisters in honor of Sister Mary's Jubilee, please click here.