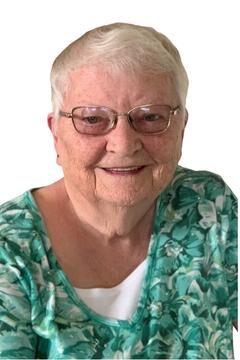 "Do not be anxious. Go straight on, forgetful of self, letting the spirit of God act instead of your own."

Mavourneen saw herself as “a good child from a good Catholic family” but never considered becoming a woman religious. Her dreams were quite the opposite—she saw herself becoming the mother of 12 children! So it was a surprise to many that three weeks after her high school graduation she entered the Notre Dame de Namur convent. She says of her calling “It’s a wonderful mystery that I have loved. I can’t explain it other than I know that God called me.”

Instead of having a dozen children, she joyfully taught thousands at Notre Dame and parish schools, for much of the time as Sister Mary Arthur. In 1964, at St. Mary’s Elementary School in San Jose, Dan Mount was one of her students. Dan was brilliant, but a troublemaker with a difficult home life. She remembers with a laugh the day he threw an eraser at her. She couldn’t get mad at him though, and instead went the extra mile to let him know she cared. The two remain fast friends today. Dan says, “I have told most who know me well, that she is responsible for keeping me out of jail, and getting me motivated and directed. I love her immensely.” (And what’s “troublemaker Dan” doing today? He’s an accomplished lawyer with a long list of community involvements.)

After 27 years of teaching, she served as a chaplain at Providence Hospital in Everett, Wash. for four very rewarding years. She was often on the scene in the emergency room or in ICU serving as a contact and comfort to the families and patients. Some nurses had difficulty pronouncing her first name which Sister told them means “my darling” in Gaelic, so occasionally over the hospital’s PA system she would hear, “My darling, please report to ER.” In time, Seattle, Wash. became her home, and she has lived in the state for more than 50 years.

Later she became a child care provider starting with two babies. As word spread around the neighborhood, she was besieged with child-tending requests. “Sometimes it was from a stay-at-home mom who just needed a few hours for herself,” Sister shares. And for 10 years Sister Mavourneen loved watching her charges grow. She saw many of them take first steps and utter first words. It was a very blessed time.

Another significant, though bittersweet job, was helping to close down the Sisters’ Provincial Offices and Villa in Saratoga, California. She was responsible for helping to sell off various assets, which she did with serendipitous aplomb, once casually chatting with a man at an airport who would later buy many items. It was also during this time that she experienced the traumatic, unexpected death of long-time friend and housemate Sister Patricia Wren.

Sister Mavourneen had never gone camping, yet in her mid-fifties, she began a 10-year experience of camping out for a week each summer in the Canadian mountains as part of a Wilderness Retreat program. Sister’s spiritual life was deeply and forever changed as a result of these experiences. It's no wonder, then, that Sister Mavourneen counts her life in seasons rather than years; so far she is at 357 and counting.

Prior to retiring, Sister coordinated the Province records in Belmont, Calif. for 21 years. When she is at home in Seattle, Wash., she volunteers in the parish, serves on the liturgy committee and is a member of the RCIA team as well as providing spiritual direction.  She counts her life as pure blessing.

To make a gift to the Sisters in honor of Sister Mavourneen's Jubilee, please click here.