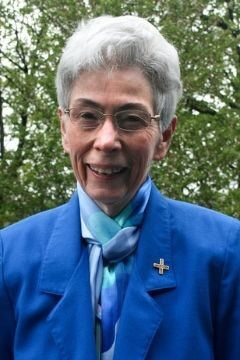 Nancy Rowen was born and raised in Lynn, Massachusetts, where she was the second of Jo and Joe Rowen’s five children. She had three sisters and one brother and went to St. Joseph School, taught by the Sisters of St. Joseph, from first to eighth grade. In the sixth grade, a missionary priest came to her school and spoke to the students about being a missionary priest. He ended his talk asking how many boys wanted to become priests and how many girls wanted to become sisters. Nancy remembered her hand shooting up, catching her by surprise, but from that point on, she carried that memory in her heart, always thinking that she’d become a Sister of St. Joseph.

Nancy entered the Sisters of Notre Dame de Namur on February 2, 1956 and made her First Vows as Sr. Joseph Christopher in 1958. (“Joseph” for both her mother and father and “Christopher” because she loved the story of Christopher being a Christ-carrier.)

Nancy’s group of new entrants was among the first to pursue full-time college courses from the newly-established Juniorate, commuting to Emmanuel College in the heart of Boston from Waltham initially, on a yellow school bus, prior to their first “mission.” And in 1959, Nancy began her teaching career, as the fifth grade teacher at St. Mark’s in Dorchester, Mass. As she recalls it, it was a disaster! She had no discipline! But it was here that Nancy began to fall in love with parish life.

The following year, she was at Cushing Central High School, an all-girls high school in South Boston, where she taught Religion and French for five wonderful years and lived with 25 SNDdeN in community. This school was one of our earliest foundations in Massachusetts, originally founded as Sts. Peter and Paul Parish Grammar School. It was centrally located in the city, had lots of congregational meetings going on, and there was a great spirit of generosity shared among the 1,000 girls who made up the student body, and the sisters and other faculty members who were committed to empowering their students, no matter the personal cost.

In 1965 Nancy was transferred to St. Joseph High School in Somerville, Mass. In addition to teaching, it was here that Nancy found herself invited by a woman named Mary Alcott into the new world of ecumenism and interfaith prayer experiences, ushered in by Vatican II. The more involved she became, the more she appreciated the humanness of the various denominations vs. the strict doctrines and orthodoxy of the Catholic Church. She found herself praying to the God of her life, “Please make me more protestant!” From the late 60’s onward, ecumenism has been one of the constant threads in her life.

In 1969, Nancy went back to St. Marks’ School in Dorchester, not as the fifth grade teacher this time, but as the principal of the school and superior of the community. In her role as superior, she was invited to make the Spiritual Exercises of St. Ignatius. Directed retreats, personal spiritual direction, and professional training in spiritual direction began to be woven into the fabric of Nancy’s life at this point.

The early ‘70’s found Nancy back on the faculty and in the community of Cardinal Cushing Central High where she once again ministered among dynamite people. It was during these years that Nancy and three other SNDdeN moved out of the convent and down the street to the D St. Project. The Sisters’ hope was that their presence would say to the families there, “We believe you’re worth living with. We want to learn from you, how to be neighbor.”

By the mid-70’s, Nancy was the director of formation for the Boston Province and became one of the earliest groups of Pastoral Associates in the Archdiocese of Boston, joining the staff at St. Catherine of Siena Parish in Charlestown, Massachusetts. Here the challenge was learning how to function with men! It was during the nine years in this parish that Nancy was touched by the Cursillo movement, became involved in sacred dance and was prepared for her next ministry on the Boston Province Administrative Team. Nancy shared this leadership responsibility with Esther MacCarthy and Mary T. Kelleher from 1985 to 1989.

From 1989 to 2003, having completed a Masters in Pastoral Ministry at Emmanuel College and an advanced certificate in Spiritual Direction, Nancy was part of the Pastoral Staff at St. John the Baptist Parish in Peabody, Mass. as Pastoral Associate with all that implies. In 2003, a sabbatical year was hers for the taking and Nancy used it to study the documents of Vatican II. From 2004 until her retirement in 2013, Nancy was part of the interfaith Pastoral Care Staff at Brooksby Village. In this capacity, she was the first CATHOLIC Pastoral Associate on board and it became one of her best experiences of pastoring. The focus was on care of elders who modeled for her, life-affirming ways to grow old.

Now in her eighties, Nancy volunteers at the Coalition for the Homeless, as a driver for Sisters living in the Ipswich retirement community, enjoys art classes and on-going training and development in spiritual direction and retreat work. In her own words in 2019, “At age 80, I am continuing to emerge and become more truly who I am.”

How good is the good God!