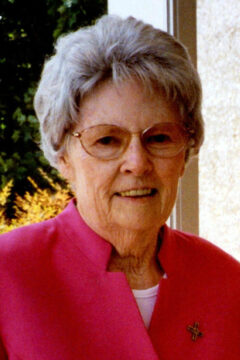 For many years, Sister Noreen lived with Parkinson's disease. Even when that physically confined her, Sister Noreen continued to find God in the mysteries of the natural world around her. She also took time to reflect on the works of Thomas Berry and other cosmic/spiritual writers.

Sister Noreen learned to drive at age 12, and when one of her brothers later served in World War II, she signed up as a driver to support the local war effort.

Sister Noreen continued to enjoy driving, and traveled the Bay Area's back roads. She loved capturing the beauty of nature through photography, and sharing with others her knowledge of many scenic spots in California.

After graduating from Notre Dame High School in Alameda, Calif., she attended CSU Chico and taught in Oakland public schools before entering the convent.

For 32 years, she provided strong, creative leadership in Notre Dame elementary schools in California, the Northwest and Hawaii.  She especially enjoyed her five years at Holy Family School in Pearl Harbor and her eleven years at Mission Dolores School in San Francisco.

A great believer in the value of education, Sister Noreen later coordinated the Tutorial Center at College of Notre Dame in Belmont, Calif. and assisted students there for more than a decade. Calm, focused, appreciative and easygoing, Sister Noreen made life-long friends among students, parents, faculty and staff wherever she served.

Predeceased by her parents, James and Kathryn Cain, and her brother, Donald J. Cain, Sister Noreen is survived by her brother, Rev. Msgr. James E. Cain.

She will be lovingly remembered and greatly missed by her many nieces, nephews, grandnieces and nephews, many former students and friends, and her Sisters of Notre Dame.