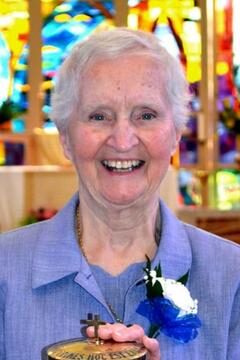 “God loves the simple heart who tries her hardest.”

Take my yoke upon you and learn from me, for I am gentle and humble in heart, and you will find rest. For my yoke is easy and my burden is light.”

Born Claire Kelley in Bedford, Indiana, Sister Raymond Loretta grew up in Lowell, Massachusetts with her parents and two younger brothers. "We had much laughter in our home and we lived happy lives," she said. She attended public schools until high school when she went to St. Patrick School in Lowell.

During her time as an undergraduate at Emmanuel College, she helped to fund her education by working Saturdays at the local A&P market. Thoughts of religious life faded during college as she imagined marriage and children. After graduating, she began teaching in a public school, and it was then, she said, "it came back to me that I thought entering the convent was the best thing to do."

Neither of her parents wanted her to enter the Congregation, because SNDdeN could never visit home. Her closest college friends thought it was a "stupid idea," and her cousin teased her, saying that "she'd be washing the floors with a toothbrush." However, she did enter the SNDdeN in 1952. Years later, when her younger brother began studying for the priesthood, she asked her father why they had objected to her decision, and he replied, "We didn't know anything about religious life but we see you're happy, so we wouldn't care if all our children went to Orders."

Her first ministry as an SNDdeN was to teach 6th grade boys at St. Mary School in Cambridge, Massachusetts. She recalled giving her students the advice to always do tasks as well as they could, so that "by the time they had their lifelong jobs they would be in the habit of doing them very well." Almost 70 years later, she laughed as she remembered that a student, Robert Taylor, raised his hand and asked, "If I become a bookie, should I do it in my best penmanship?"

Ipswich, Massachusetts, was her next destination, where she served as provincial secretary, also spending some time at the Congregational convent in Rome. After six years, she returned to Emmanuel College, this time as assistant academic dean, then later as associate academic dean.'

"In '86," she said, "I really wanted to work in the inner city before I was too old, so I resigned, and I taught for 10 happy years at St. Mary in Lawrence and loved it." After the school closed, she worked at Notre Dame Academy, Tyngsboro for four years.

At age 70, she asked to leave her formal educational ministry, but to continue work in a volunteer position at St. Patrick School in Lowell. Receiving permission, she embraced the opportunity to work with students of many cultures. “It was wonderful with every teacher on the same page: to teach as well as possible so that life could be better for these students."

Nine years later, she left St. Patrick, saying, "No matter how much I love these students I shouldn't be teaching them when I'm 80!" Her decision was prescient, as within a year she developed some health problems. Now, she is very happy to be living with other Sisters in the Ipswich community, she said. "We have a dear staff who care for us, and we love them!" She participates in exercise classes every day as well as in other scheduled activities.

Sister's favorite quote from scripture is: "When Jesus said, 'My yoke is easy and my burden is light…' because God is so present to us always, in the ministry and in the community in what we do, and what we are, and what we live, and there's the promise—that it's not impossible."

Looking back on her 70 years as an SNDdeN, Sister Raymond Loretta can't choose a favorite ministry, saying that she loved all the jobs that allowed her to work with students. Asked why she remained an SNDdeN and its meaning to her, she responded, "We have a great drive for the ministry and the mission, as well as strong relationships with one another and with God."

To make a gift to the Sisters in honor of Sister Raymond Loretta's Jubilee, please click here.