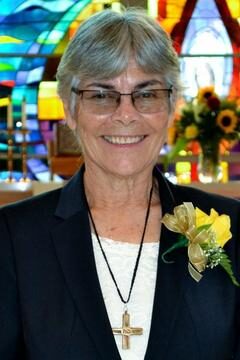 I was born in Boston and raised in Cambridge, the sixth of 10 children; five girls and five boys. A girl and a boy died as infants. My third-generation French Canadian parents were raised in Central Massachusetts and my father was a roofer. Both parents worked very hard with so many children. My mother cared for my blind grandmother, on top of taking care of us and assisting my father in his small business. Remembering their challenges, I stand in awe at all that they were doing for us!

All of us children went to Catholic grammar schools, and I was the only one who went to a Catholic high school, specifically Archbishop Cushing Central High School for Girls in South Boston. I loved it all, especially my teachers. They were excellent and I am eternally grateful for all I learned from them. To this day, I can still see them, even my grammar school teachers! Some of my teachers are still living, including Clare Kelly (Grade 5) and from high school, Mary Mulligan, Christine McGuirk and Nancy Rowen. God bless each one! Their kindness and joy, besides their academic teaching, sealed themselves forever in my heart.

The gift of the Sisters in my life weighed significantly. When I was 11 years old, I was already thinking of becoming a Sister. At that age, I thought that if I became a nursing Sister, I could help the sick and also be close to God. However, during my sophomore year of high school I really focused seriously on Notre Dame. My teachers were the daily reminder of the Call that did not go away. I had other attractions at the time—journalism, drama—but this dominated and in the end that's what i responded to with the Grace of God. During this time, I was also attracted to the Maryknoll Sisters, because they were a Missionary Order.

I entered the congregation at Ipswich in 1962 with 61 other girls. We were the first postulants to enter the newly built novitiate at Ipswich. I take delight in sharing this with others!

I made first vows in 1965, graduated from Emmanuel College and was sent to St. Charles School in Woburn, Mass. to teach fifth grade. In retrospect, it really energized me that during the year I entered we opened our Brazil Mission! I felt truly called to the Latin culture and the work and place where our first five Sisters began this work. I applied to go to Brazil and was accepted so started to study Portuguese.

It was discovered at this time that my father had lung cancer. I felt dreadful for him, and certainly would not leave for Brazil at this time. I was missioned to Salem, N.H. to teach junior high language arts. It was a great experience that I appreciate to this day. I was there only a year and a half. After my father died, I went to Brazil. His death was difficult to take, as he was a great father who worked hard all his life. He lived for his family.

In 1973, I landed in Rio de Janeiro for Language School where I studied for three months with 65 people from 14 different countries! I loved it, though the language was a challenge! I made friends that I still have to this day, almost 50 years after that time together. These contacts and friendships made a profound impression. The world opened up for me!

Brazil and its incredible mission with totally dedicated people—Sisters, Priests lay people, young and old—entered my life and taught me everything from cutting rice with the farming families to walking miles to reach outlying villages in the interior. When I lived on an island for 18 of my 36 years in Brazil, I traveled 72 hours (round trip) on the Amazon River to reach the river folk in their villages. We were a small team that met with the people in the villages to discuss their land problems.

The suffering of these people on the island, and where I lived before in Maranhão, is endless and the cause of it all is the ongoing injustice towards the farmers in rural areas, Indigenous people, poor people on the periphery of large cities, river folk, corrupt politicians, all those in huge violent cities where uncontrolled police physically attack those whom they are arresting.

While in Brazil, I learned an approach that respects the people who are served and I will be using this for the rest of the days God gives me: The people are the heart of the mission. I learned to ask questions and build with the people around their issues as they identify them, not always what I see but what they see and feel are their needs. I think that is the bottom line for us all: We cannot identify the problem to work on; the people know what they feel and see and that is what we work on together. I gained tools and insights among the poor. They have gifted me forever!

Notre Dame de Namur Sister Dorothy Stang's death is the result of the ongoing injustice around land issues with the poor. She gave her life as she, too, continued to face the never-ending injustices that confront the disenfranchised people in Brazil. She was tireless and totally gave of herself to the call that she received as an SNDdeN. Her death is known throughout the world.

In 2019, I returned to the United States for good. I wanted to accompany my sister who had Alzheimer’s disease, and even before I left Brazil I had reflected on what this return would mean. Within our family of 10 children, I knew that after my wonderful sister died, as she did 10 months after I arrived, my brother Lou would be my last living sibling. I wanted to spend whatever time God gives me to be able to appreciate him and to share whatever is possible.

I am working with immigrants, and belong to Pax Christi, the international Catholic Peace movement. I have gone twice to the Texas-Mexico Border and twice to Phoenix to work with and welcome new immigrants. I carry with me what Brazil taught me about the heart of the mission. I am eternally grateful and humbled by these gifts. Notre Dame made all this possible for me. I live with three other Sisters who are dedicated and help create a wonderful community.

Looking back on these 60 years, I am grateful for the ongoing inspiration of the Sisters who taught me and also the privilege to have served in Brazil for 36 years. This is what I celebrate in a very special way in my heart and soul. I love Notre Dame with my whole heart!

To make a gift to the Sisters in honor of Sister Rita's Jubilee, please click here.