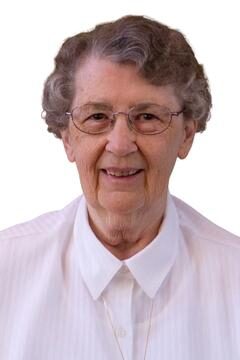 Mary Berenice Monahan, as she was named at birth, was one of George and Mary (McGee) Monahan’s nine children. Within the family she was known as “Bunny,” perhaps to avoid confusion, since her mother’s name was also Mary. They lived within St. Matthew Parish in Dorchester, Mass. when she was a small child.

When she was 12, her father died following a long illness. At that that time the family was living in the new housing projects in East Boston across from Holy Redeemer Church. Her maternal grandfather owned a barber shop, and her mother cut women’s hair there in her younger years.

To help support the family after her father’s death, her mother worked in Holy Redeemer School’s Cafeteria. Bunny’s elder sister by eight years was named Rose; she had already entered the Sisters of Notre Dame and was known as Sister Regina St. George.

Bunny met the Sisters of Notre Dame de Namur at Holy Redeemer School. She was very spiritual and felt God calling her, but also felt sure that she she did not want to become a teacher.

After graduating from Holy Redeemer in 1952, she entered the novitiate at Waltham, Mass. taking the name Sister Rose Elizabeth in honor of her sister. Still certain that she did not want to teach, Sister Rose instead ministered to the Sisters of Notre Dame de Namur and other women religious for the next 70 years, living mainly in Ipswich and Worcester, Mass.

A gifted seamstress, Sister Rose was first missioned as a Clotheskeeper for the Sisters at Waltham, and she had the same role at the novitiate that opened in Ipswich in 1962. As one of the first to live at the new facility, she was considered “A Cornerstone.” Her talents as a seamstress extended to making clothes and quilts and she has enjoyed knitting and crochet throughout her life. She is also an excellent hairdresser (like her mother and grandfather!) and was always happy to help the older Sisters with their hair.

After many years in Ipswich, Sister Rose was missioned to the SNDdeN community at "the lake" in Worcester, Mass. for approximately 10 years. There she trained to be a Licensed Practical Nurse at St. Vincent Hospital and used her new knowledge to tend to Sisters who needed care. She was next missioned to Rome, Italy, to support the Sisters living at the SNDdeN Generalate, but had to return to the U.S. after a short time due to some health concerns.

Soon after, she was again missioned to Ipswich in 1981 to the House of Loretto, a mansion on the Ipswich property that at that time was used for spiritual retreats and other activities. She served as housekeeper and cook and became a treasured, caring, listening presence to those who came to pray and reflect.

Sister Rose eventually returned to Ipswich, where she is now part of the Sisters’ residential care community. For Sister Rose, the greatest blessing is the people around her. She is both loving and loved by Sisters and staff and is involved in all aspects of activities offered for residents at The Learning Center. She has a wonderful sense of humor and is gifted in visual creative art projects. She never misses an outing! One could say that Sister Rose made a full circle, as The Learning Center is the space where, many decades before, she served as Clotheskeeper.

Sister Catherine Griffiths, who has been a good friend of Sister Rose for 70 years says of her, “Rose loves the Sisters and never misses an opportunity to be with them. Her sense of humor and love of life shines through. What most touches me in our long, loving friendship is the fire of God and the prayerfulness I sense in her. Whenever I’m with her I feel that I am in the presence of God.”

To make a gift to the Sisters in honor of Sister Rose's Jubilee, please click here.