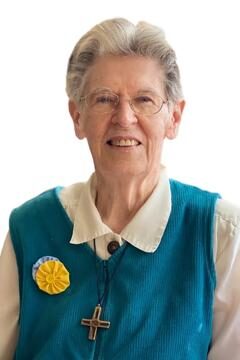 Edithann Kane is the eldest of Ann Marie (McKenna) and Frank Kane’s three daughters. She was born in Brooklyn, N.Y. but because of her father’s career as an Army officer she’d lived in Texas, California and Maryland by the time she was 10 years old. At that time, the family moved to Washington, D.C. where Edithann met the Sisters of Notre Dame de Namur at St. Francis Xavier School. She continued her SNDdeN education at the Academy of Notre Dame on K Street.

As their student for eight years, Edithann admired the Sisters and was impressed with their simplicity and “humanness.” Though her youthful desire to enter the Congregation in 1962 at Ilchester, Md. may have been to “save my soul and the souls of others,” (as was the thinking at the time), her motivation to remain an SNDdeN for 60 years has been something very different: “This is a wonderful group of women who have a common mission and we support one another and love one another and I think together we’re able to do more than any one of us could do by ourselves in terms of communicating God’s goodness to people through our work with education and our emphasis on justice and peace. That keeps me going!”

After completing her formation as a Sister and earning a degree in English from Trinity Washington University, Sister Edithann was assigned to teach seventh and eighth grade in a parish northeast of Philadelphia. “I always say to people that I always wanted to be a teacher until I taught,” she says with a laugh. Teaching was challenging, and though it became easier over time she was happy to leave after five years to become the Province Secretary back in Ilchester.

Sister Edithann earned a master's degree in adult education at Teachers College, Columbia University in New York City, and was awarded a six-month research fellowship into how to make community colleges more effective in a local area. This work was relevant as she ultimately became Director of Formation during the time of great changes, post-Vatican II, in how young women entering the Congregation were educated.

Looking back on her ministries, the one in which she feels she grew the most was while at the Archdiocese of Baltimore. For most of her 15 years at the Archdiocese she was Assistant to the Eastern Vicar, Bishop William Newman. She learned a great deal as she accompanied him on all his pastoral visits and gained further confidence as she interacted with people—religious and laity—during her time in the role. She also served as Delegate to Religious for the Archdiocese.

Sister Edithann then spent eight years in province leadership, working in a compatible and complementary partnership with Sister Mary Donahue. Their different styles were in evidence on the very first day of work when Sister Edithann researched in the files from the previous administration and created a task list, all while Sister Mary decorated her office!

Other significant ministries, Sister Edithann notes, were her time with NETWORK, the women religious Catholic Social Justice organization, and with the Notre Dame Mission Volunteers. “I was so impressed with the young people who were giving a year, sometimes two, serving in areas where children needed more support in their education,” she said. Her organizational and administrative skills were used fully as she coordinated the preparation for the Congregation’s general chapter meeting at Trinity Washington University in 2014.

Her desire to “slow down a bit”—a very relative term for Sister Edithann—coincided with a need for help in the SNDdeN Tri-Province Development office. For three years she supported efforts to increase support for the Sisters’ ministries, most visibly as editor of the quarterly newsletter called “Endeavor.” Though Sister now lives in community with Sisters in Ipswich, Mass., she continues to do some development work at a distance.

Sister Edithann has approached her Jubilee with a grateful heart: “I just feel incredibly grateful for the 60 years that I’ve had. There have been some really hard ones—some where I wasn’t exactly the best person I could be—but it’s been a wonderful life, especially with the support of community. We always say, ‘where one Sister is, we all are,’ so you have this sense that even though you’ve just done this little thing you’ve been part of something so much bigger that has made a difference in the world and in individual lives.”

In her life now, Sister Edithann enjoys the beauty of nature and the extensive grounds of the property in Ipswich. She loves seeing her family, including her two sisters, six nieces and nephews and six great nieces and nephews! And when she knows that she has helped someone, no matter whether in a big or small way, she feels joy.

To make a gift to the Sisters in honor of Sister Edithann's Jubilee, please click here.