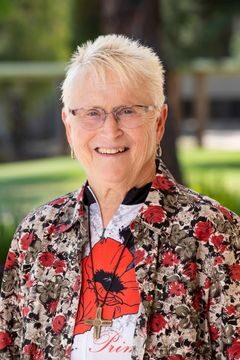 The Sisters' service to the poor and homeless goes back to the founding days of our community in France:

"I thank you for the two chemises.  You wouldn't believe how glad I was to have them for my two poor little girls.  I have another child still who came almost without clothing….I have given her one of my camisoles, a kerchief, a bonnet – in short, all I could.  Her poverty was frightening."

Poverty and homelessness are frightening realities, but Sister Susan (Ann Joachim) Olson is among those who has helped to give people a brighter future.

In the early 1980's, Sister Susan was in Washington, D.C. coordinating a Congregational Notre Dame program when her parish asked for volunteers in a women's shelter. That first overnight, she was stunned. "All these women looked like my mother. They weren't young, but they were on the streets." After that, she became more and more aware of homeless people in doorways and subway stations, and the numbers crowding into shelters at night.

Returning to California, Sister heard that Sr. Marie Veronica Wagner was starting a shelter for women and children in Watsonville and Sister Susan offered to help her get started.  For 10 years, the two Sisters not only provided temporary housing for families, they were also effective in helping to break the cycle of homelessness in the area.

Fast forward 25 years. Sister Susan was asked to return as director of the Pajaro Valley Shelter, which at the time was faced with increasing needs and greatly diminished resources.

Who are some of the homeless people they serve? Spanish-speaking farm worker families, people moving on from drug and alcohol programs and women out of jail who need a safe place to stay while getting back on their feet.  The list goes on and on. Thankfully, Sister feels, the women who run the shelter now have been through the programs themselves and are the best possible advocates and guides for today's families.

Outgoing, with a great sense of humor, Sister Susan has a way of empowering others to join her in the challenge–whether it's helping homeless people deal with their own recovery needs or enlisting community support to assure the struggling poor that they still have a safety net in the challenge time. Sister stepped down from serving as the Executive Director at the shelter, but continues as an integral part of its advisory board.

Following her work at the shelter, Sister Susan served as a host and caretaker of the Sisters' House of Prayer in Carmel, California. She now assists Moreland Notre Dame School in Watsonville, Caif, with their development efforts.

In 2015, Sister Susan walked the Camino de Santiago with her brother Bob. In recent years, she has worked along with Sister Judy Flahavan at a detention center in Texas and support centers for immigrants coming accross the border in San Diego and Pheonix. They served at kitchens feeding homeless and immigrants in Tijuana and Nogales Mexico. These services helped Sisters understand the plight of people, especially women with children, escaping violence in El Salvador, Honduras and Guatemala.