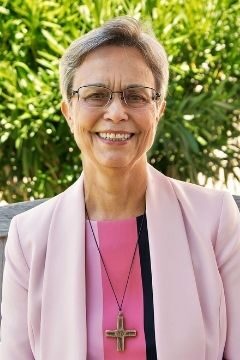 Sister Terry Davis serves as Communications Director for the U.S. East-West Province of the Sister of Notre Dame  de Namur. During the previous thirteen years, she worked for the Diocese of Stockton in two capacities. She organized a diocesan Synod that involved every parish in deciding the future direction for the diocese. Her other role has been the Director of Communications which involved organizing press conferences, overseeing publications and creating a presence in social media. She worked with Bishop Stephen Blaire, whose commitment to keeping the needs of the poor in mind during decision-making resonated with her desire to improve the lives of those in need.

In her role as the spokesperson for the Diocese, it was not uncommon to get angry messages and calls. In one instance, she handled a call from someone who was very upset with the Church. After a lengthy conversation, the woman ended by saying, “I have to remember that the Church is filled with good people, too.” and they became good friends following that encounter.

The other dimension of her role in communications was to use her artistic gifts in designing printed materials and graphics for social media. She became known as the diocesan photographer and whenever she was at an event without her camera, was asked why.

Sister Terry’s artistic gifts were inherited from her father who was a talented artist. She took to drawing and painting naturally, and loved art in elementary school. Her most formative art education was at the then College of Notre Dame, under the inspiring guidance of Sister Margaret Hoffman. Sister Terry was especially awed by the beauty of nature that has captivated her throughout her life into adulthood when she expanded her artistic talent by becoming a photographer.

Following her graduation from St. Francis High School in Sacramento, Sister Terry felt drawn to the Sisters of Notre Dame de Namur and entered the congregation at the age of 18. Sister Terry taught art to high school students at St. Joseph-Notre Dame High School in Alameda, Calif., and later at Notre Dame High School in San Jose, Calif. One of her students is now a professional photographer in Sedona, Arizona, and others are accomplished artists and—she notes—outstanding women. She also taught English and Religion classes. She keeps in touch with a number of her former students who have become good friends.

Sister Terry considers her six years on the Congregational Leadership Team as one of the most profound experiences of her life. She was deeply moved by seeing the Sisters of Notre Dame de Namur in developing countries who tend to those living in poverty,

The poverty in those countries made her realize how much we have and take for granted. The joy and hope of the Sisters of Notre Dame de Namur she met touched her deeply. They are, she explained, “heart-broken for the right things.” Perhaps she chose one of her favorite quotes from St. Julie as a result of seeing the difficult circumstances faced by the Sisters working among the poor in Africa and Latin America:“Draw great advantage from all trials. Nothing causes trees to be more strongly rooted than great winds.”

For about fifteen years, Sister Terry's IKONGraphics business provided design services to non-profit organizations. She comments, “I met some of the finest people during those years and watched with admiration as they worked to make our world better, especially for the most disadvantaged among us.” Evidence of her work can be seen in a number of churches, including St. Joseph Cathedral in San Jose. Her art work is available online, with profits from sales going directly to the Notre Dame de Namur Jubilee Fund that benefits Sisters working in Africa and Latin America.

During her Jubilee year in 2017, Sister Terry said, “I have always felt the support of my community, the love of our Sisters. I am deeply grateful to have been called to Notre Dame.” Not surprisingly, one of her favorite passages from scripture comes from Ephesians 3:20-21:  “Glory be to him whose power, working in us, can do infinitely more that we can ask or imagine.”