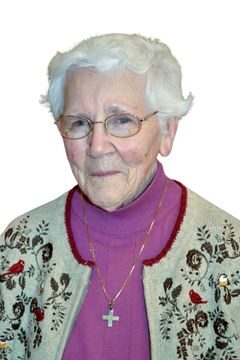 Sister Theresa Cunningham went home to her good God on October 6, 2022, at age 96 after serving 77 years as a Sister of Notre Dame de Namur.

Sister Theresa was born in Wext Roxbury, Mass., to parents Francis and Rose (Branley) Cunningham. She had eight siblings. She entered the Sisters of Notre Dame de Namur in 1945, taking the religious name Sister Rose Frances. She earned a bachelor's degree in English and History from Emmanuel College and a master's in educational psychology from Salem State University. In addition, Sister Theresa took many graduate study programs in the visual arts.

Sister Theresa taught mainly at elementary schools, including teaching art and computer classes. Her long career as an educator brought her to many schools throughout Massachusetts. Her final formal assignment was with the Archdiocese of Boston, working with The Pilot, the Boston Archdiocesan newspaper.

Sister Theresa leaves many nieces and nephews and her sisters in religion, the Sisters of Notre Dame de Namur. She was predeceased by her sister Dorothy M. Curtis and her brothers, Msgr. Richard G. Cunningham, Francis A. Cunningham, Jr., and Thomas J., John P., William A., Philip J. and Edmund O. Cunningham.

Sister Theresa's funeral was held at the Notre Dame DuLac Chapel in Worcester, Mass., on Thursday, October 13th. Mass began at 2:30 PM. She was laid to rest at St. Joseph's in West Roxbury.

May she rest in peace.