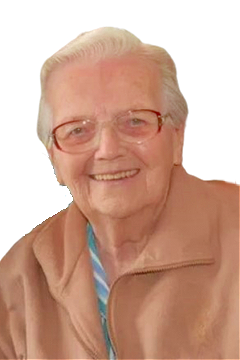 “How Good is the good God!”

Sister Theresa was born and raised in Lynn, Massachusetts and was educated by Sisters of Notre Dame de Namur through high school. Her parents, John and Beatrice, both immigrated from Ireland, and she was one of six siblings—all girls except for the youngest.

Described by both herself and her family as, “the biggest tomboy in Lynn” she credits her father with teaching her how to do repairs around the house and play sports, because of her interest in them and perhaps because there was no boy in the family until long after she was born. Her father’s tutelage was valuable as she became team captain of the basketball and softball teams in high school. And she found that her handyman skills were later very useful in the convent!

During high school she realized that she had a special knack for interacting with little children, so it’s no surprise that all her ministries as an SNDdeN were to educate children in lower grades. In 1952, she entered the congregation, taking the name Sister Theresa Joseph. In the novitiate she attended Emmanuel College in Boston, then earned degrees in education and history from Salem State University.

When notified that her first mission was to teach at her alma mater, St. Mary’s School in Lynn, she was quickly reassigned when she explained that she still had four siblings currently attending the school! After various posts as a teacher or principal, she was transferred to St. Mary of the Annunciation School in Danvers, Massachusetts. She spent 43 “happy, happy, happy” years teaching first grade there. Her students keep in touch; she recently received a visit from two generations of a family that had Sister Theresa as their first-grade teacher. Such was Sister Theresa’s impact at St. Mary’s that the school’s annual fundraising tournament was named the Sister Theresa Ryder, SND Golf Classic.

Sister describes herself as shy and was determined to help her students learn to be self-assured. She gave assignments that they were required to present to the entire class. Over time, the youngsters became comfortable with public speaking and talking with other adults at the school. She feels that she helped “take that ‘scaredness’ out of their system.”

“Children were sacred to me,” she says, while visibly moved, and her love for them is clear. “My pride and joy,” “God’s little angels” and “heaven on earth” are among the phrases she uses to describe her students and her experiences as a teacher.

“My aim was always to make the children happy in their surroundings and do likewise to the teachers and make sure they got the best that was healthy for them and for their education,” she says.

The power of prayer gives Sister Theresa hope. “Our Lady is my inspiration,” she asserts, recalling that that her seventh-grade teacher, Sister Joseph Sabina, told her students to “always stay close to Our Lady and harm will never come to you.” She also suggested that they say three Hail Marys before going to sleep. Sister Theresa marvels that so many decades later she still says the three Hail Marys every night, saying, “It’s like a big thing that’s pushing me closer to the place someday we hope to meet.”

Reflecting on her 70 years as an SNDdeN, Sister Theresa says, “It was a gift. And to think— the thousands and thousands of children that I brought closer to the Almighty!”

To make a gift to the Sisters in honor of Sister Theresa's Jubilee, please click here.