As we come into the season of Advent this year, we carry in our hearts and minds, the heaviness of our times: “wars and rumors of war,” nations convulsing with protests from within, repeated mass shootings and the bombings of synagogues in our own country, hate crimes on the rise globally, as we breathe in a toxic environment of lies and abuse of power all over the world, with millions of refugees fleeing their homelands seeking peace, safety and a future for their children, then stand unwelcomed, etc., etc., and we stand and wait… Are we fools? We wait with hope because “a child was born to us, a son was given to us,” and we choose to spend the next four weeks preparing anew to recall and to celebrate this birth on Christmas Day, 2019.

The Word was made flesh and continues to tent among us and we have come to know and to hope in the Man-Child who “grew in wisdom, age and grace,” and who “was crucified, died, was buried and rose again on the third day.” We have come to hope in the promise made to all Creation in His resurrection: the fulfillment of ALL in the Omega Point toward which we ALL are moving!

Just as Mary beheld only a “vulnerable baby boy dependent on others for his every need”* with her earth-eyes, she believed and hoped in God’s promise in her heart that this truly was the Son of the Most High, and yes, “blessed is she who believed,” so too, as we see only “our sin-sick world”* with our earth-eyes, we are asked to believe and hope in our deepest of hearts in the power of God at work in our contemporary world. God may be acting as invisibly as yeast in the dough, but God continues to act with and through all people of good will and through all acts of love, great and small, to “renew the face of the earth.”

In our own Advent faith journey this year then, Mary of Nazareth can be our truest and strongest advocate and companion. Perhaps she would join us, if we ask, as we pray, as we love one another, yes, even as we BEG this year for the sake of our world, as she did in her day, “Come, Lord, come!”

*"Weightier the Waiting” … Mary Stommes, editor of Give Us This Day 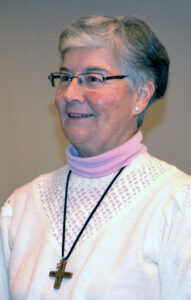 Sister Ginny Scally was educated by the Sisters of Notre Dame in her home parish of St. Gregory’s in Dorchester, Massachusetts. She joined them after graduating from high school. Like most SND’s, her professional life began as a teacher in an elementary setting. Because of her involvement in the parish religious education programs in those early years, she also was influenced by the spiritual needs and hungers of the laity she met. As a result of those encounters, she chose to pursue graduate studies in Theology with an emphasis on Scripture and Spirituality. She was a Pastoral Administrator in priestless parishes (Read "pastoring person!") in the Diocese of Saginaw, Michigan for over 20 years, completed a hospital chaplain's residency and served as the Coordinator of Catholic Pastoral Services at the North Shore Medical Center in Salem, Massachusetts. Ginny was recently appointed one of the three Support Coordinators serving in the Northeast Region of the East-West Province and continues to live in Peabody, Massachusetts.

Our thanks to the Congregational Mission Office of the Sisters of Notre Dame de Namur, which publishes Gospel Reflections for Sundays and Feast Days.