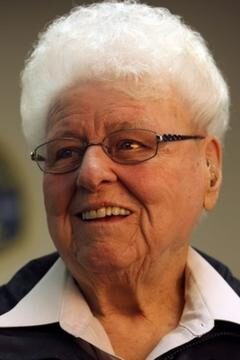 Barbara Geib was born in San Francisco on October 3, 1932, and entered the Notre Dame Novitiate at Saratoga after graduating from Notre Dame High School, Belmont. She had visited the novitiate with her classmates during her junior year and she said, "I immediately felt this was God's call. Each step toward entrance, I had the same feeling – and I still do. I've been so blessed. I never dreamed as a young nun that I could do the things I'm doing."

For 21 years, Sister Barbara (James Marie) Geib served in Notre Dame ministries in elementary schools and parishes from Santa Clara to Los Angeles, and Honolulu to Seattle. In 1976, just as her one-year assignment as religious education coordinator at St. Mark's, Seattle, was ending, she heard that St. Mary of the Valley, a small rural parish in Monroe, Washington, needed a parish Sister. There, Sister had responsibility for RCIA, baptismal and funeral preparation, home visits, and communion calls to homes and hospitals, but that wouldn't begin to describe it–or her.

In 2012, on the occasion of Sister Barbara's 60th Jubilee as a Sister of Notre Dame de Namur, Rev. Philip Bloom, pastor of St. Mary's of the Valley, said, "We are so grateful for her presence here. She reaches out to people who have been hurt by past experiences in our church and talks with them in a very gentle way. For her, church is people–all people. She reaches out to those who are broken by domestic violence or other family problems. In the many years she has been here, St. Mary's has changed from a small, rural, Anglo parish to become a suburban parish, with a majority of its people Spanish speaking. She speaks enough to participate at the Spanish Mass and be loved by the people. She is a good example for others."

Sister Barbara was also a long-time chaplain and domestic violence advocate for the Monroe Police Department. There she worked closely with Detective Sergeant Cindy Chessie whose listing of "Sister B's" work ranged from staffing the lost child booth at the state fair, responding with officers to emergency calls, offering services and support to domestic violence victims, and accompanying officers on death notifications, a very tough job that nobody wants to do. No holiday, birthday, or arrival of a new baby in an officer's family went un-gifted. "Sister B supports officers and their families with whatever is needed," said Chessie in 2012. "We are so thankful that she is part of our team." While many parts of her role as chaplain were not easy, Sr. Barbara had no plans for stopping. After all, she would say, "This is my family!"

Sister Elisabeth Tiernan, SNDdeN, who has also served for many years in the Northwest, wrote that “Sister Barbara has made the words of St. Julie, Notre Dame’s foundress, come alive:  ‘How good is the good God!’  She has lived a life sharing that goodness.”

Sister Barbara died in Monroe while surrounded by a roomful of friends singing “Amazing Grace.” For several weeks before her death, she was at care centers in Monroe where she had visited patients regularly for many years. When arriving, she was warmly greeted by physical therapists, nurses, aides, cafeteria workers and staff. At a recent visit, Monroe Police honored Sister Barbara by playing the bagpipes for her. If you'd like, you can listen to the homily that Father Bloom delivered Sunday, February 4, when he spoke about visiting Sister Barbara at the hospital earlier that morning. She died soon after the mass ended.

Sister Barbara was loved and will be greatly missed by her brother, Gerald, her cousins, Fran and Mary Croak, by hundreds of other friends from the church and community, and her own Sisters of Notre Dame de Namur.

Click here to read the account of the Vigil, Liturgy and process of bringing Sister Barbara to her final resting place.

To make a donation in Sister's honor, click here.