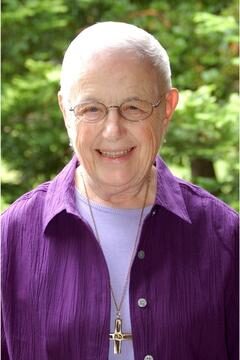 A generous, multi-talented person, Sister Ann Bernadette Barnes, SNDdeN, was a lifetime believer in the power of education.

Sister Ann Bernadette was known for her commitment to the Blessed Mother, and her insistence on the equality of women’s voices in the Church and national affairs.

She also loved the color purple.

The older daughter of Nebraskan parents who moved to California to work for United Airlines in the early days of passenger air travel, Patricia Barnes grew up in San Carlos. She attended Our Lady of Mount Carmel School in Redwood City and Notre Dame High School in Belmont. After a year at San Jose State College, she entered the convent.

In her seventy years as a Sister of Notre Dame de Namur, Sister Ann Bernadette served for many years as a dedicated elementary and secondary teacher and administrator. In 2006, she brought her rich educational experience to Cristo Rey High School in Sacramento, when she helped establish the school. She enjoyed both teaching there and mentoring new teachers.

One of her favorite experiences was teaching English as a Second Language and coordinating a high-school-diploma program for students ranging from 18 to 70 at the Notre Dame Education Center in Lawrence, Massachusetts. One of her former students wrote to her, “My life has been changing for the better, thanks to your dedication and patience . . . . you will always be a role model in my life.”

In her five years as a staff member of the Emergency Housing Consortium in San Jose, Sister Bernie advocated for homeless people needing mental health and employment services. She also served as the liturgy coordinator at the large multi-cultural Most Holy Trinity Parish in East San Jose; she provided Notre Dame hospitality at the House of Prayer in Carmel, and she contributed as a Board member at Notre Dame de Namur University in Belmont.

She was fortunate to live close to her only sibling, Bonnie Barnes Fox and her husband, Jim, and their very caring family, joining them for weekly family dinners surrounded by grand-nieces and nephews, and enjoying the comedic skits they performed.

Sister Bernie died peacefully on October 16, 2020, at Mercy Retirement and Care Center in Oakland, after being a member of the Province Center community in Belmont for the past ten years. She will be lovingly remembered by her family, her Sisters of Notre Dame, and many former students, colleagues and friends.

In her senior year at Notre Dame High School, Belmont, Patricia Barnes was approached by one of her teachers who startled her by saying, “I hear you’re going to enter.” Becoming a nun was NOT in her plan, however, and after graduation, she went off to San Jose State University. During that next year, she continued to keep in touch with one of the Sisters. It was through her encouragement and Pat’s own growing attraction to a life of prayer that eventually moved her to join the Sisters of Notre Dame de Namur.

As Sister Ann Bernadette, she remembers making her first vows on a Saturday, and on the following Monday she was teaching a 5th grade class at St. Joseph Elementary School in Alameda! After five years in elementary schools she was assigned to teach at her high school alma mater, where one of her students was her own sister, Bonnie (now Bonnie Fox). In 1968, she became the Assistant Principal for Notre Dame High School in San Francisco and then served as Principal from 1970-1975, and later returned to the school as Dean of Curriculum.

Sister Bernie also worked with Father Miles O’Brien Riley as an associate director of communications with the Archdiocese of San Francisco and then, in 1983, she was asked to assume ever-expanding responsibilities at the newly established Emergency Housing Consortium in San Jose. There, she worked with people who were experiencing homelessness, and helped set up programs for those needing advocacy and assistance through mental health programs and employment services.

Returning to the classroom for seven years at the Notre Dame Education Center in Lawrence, Massachusetts, was one of Sister Bernie’s favorite experiences – teaching English as a Second Language and coordinating a high school diploma program for students ranging in age from 18 to 70. “Adults are so eager to learn,” she says with a chuckle, “and there are no discipline problems!” Ricardo Franco from Colombia was one of the many adults she taught. In 2007, Ricardo wrote Sister, “My life has been changing a lot for the better, thanks to your dedication and patience … encouraging me to give the best of myself. As a result of it, I continue my education, and I am working on my associate degree! You will always be a role model in my life.”

When Sister Bernie returned to California, she volunteered to be one of four SNDdeN pioneers to help establish Cristo Rey High School in Sacramento. She brought her lifetime of educational experience and energy to this new school, where she enjoyed teaching students and mentoring new teachers.

Other ministry assignments have included directing the sacramental program and coordinating the liturgy program for the large, multi-cultural Most Holy Trinity Parish in East San Jose, CA, from 1987 to 1992. She also served for several years on the Board of Trustees for Notre Dame de Namur University, and assisted at the Notre Dame House of Prayer in Carmel.

Sister Bernie was a member of the Province Center community in Belmont for ten years before recently moving to Mercy Retirement and Care Center in Oakland.

A generous, multi-talented person, Sister Ann Bernadette has been committed most of her life to working on behalf of those struggling with poverty and who have found themselves on the fringes of society. “At this time of Jubilee,” she said, “I am grateful for the wide range of educational experiences I have enjoyed, the students who have enriched my life, and the co-workers who believed in the work we were engaged in.”