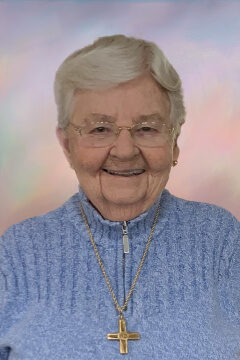 Sister Irene Murphy (formerly Sister Eleanor William) entered Notre Dame more than seventy years ago, in 1950, and she exudes the peace and joy of a happy and good life.

Sister Irene witnesses to God’s goodness alive in her and appreciated in others and in all creation. Clearly, Sister Irene is happy in her vocation, and she readily shares that happiness with others. Born in Dorchester, Mass., the daughter of Eleanor (Martine) and William Murphy, Sr., Irene shared family life with four brothers and two sisters. She attended public grade school and then studied at SS Peter and Paul High School, later Cardinal Cushing High, where she had the Sisters of Notre Dame de Namur as her teachers.

Sister Irene especially appreciated her freshman teachers, who interacted well with each other and with the students. Throughout her high school years Sister Irene found the Sisters “such fun.” Sisters Margaret St. Joseph, Catherine Margaret, and Mary Elizabeth Broderick stand out in Sister Irene’s memory of these years. Her high school teachers impressed Sister Irene with their joy in being Sisters of Notre Dame and influenced her call to religious life.

For many years Sister Irene taught elementary school in Massachusetts, Rhode Island—where she opened St. Kevin’s School in Warwick—and in Connecticut. She then went to Holy Name School in Chicopee, Mass., where she taught for eight years before becoming principal for 28 years. Sister Irene’s strength throughout her educational ministry was, “I loved the children.”

Of all her ministries, Sister Irene liked administration best. She maintained an open door policy. Teachers, students, parents and staff needed no appointments. They had simply to knock at her door and would hear a warm, “Come in.”

After leaving Holy Name School, Sister Irene moved to Springfield, Mass., where she continued her witness to God’s goodness by working and praying with the elderly as a volunteer at Mercy Hospital. She also served as Eucharistic Minister in the hospital and to those confined to their homes. This ministry, of course, involved pastoral visits and reaching out in many ways, including hosting a semi-annual party for the elderly.

Our co-foundress, Francoise, strongly impressed Sister Irene, no doubt because she was an excellent administrator. Sister Irene feels that Francoise does not always get the recognition she deserves. Sister Irene also admires Sister Loretto Julia Carroll (a former head of the SNDdeN congregation) and sees a parallel to Francoise. Both strong women had a stern face and yet a tender heart, and both administered wisely.

Life for Irene always involves some play. She enjoys entertaining and visiting friends and neighbors. In her quiet time Irene reads “all sorts of books.” She also likes jigsaw puzzles and keeps one going for others to share. Irene expresses her artistic side in painting by numbers on her iPad and crocheting lovely afghans.

In 2019, Sr. Irene officially retired and moved to Julie House in Windsor, Conn. There she continues the essentials of her ministry, witnessing to God’s goodness and the joy of a life well-lived.

As she looks back over her more than seventy years in Notre Dame, Sister Irene rejoices in her vocation and appreciates the gifts of each of her ministries.