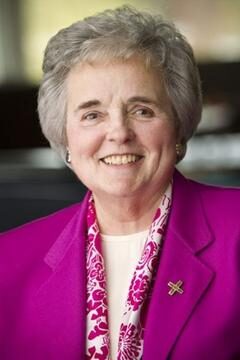 In 2022, Sister Janet Eisner retired after 43 years as the president of Emmanuel College in Boston, Massachusetts. At the time of her tenure, she was the longest serving female president of a college in the United States and the longest current serving president of a Catholic college or university. She led the college during its transition from an all-women's college to a coeducational institution.

The eldest of four children, Janet grew up in Lynn, Mass. She entered the Sisters of Notre Dame de Namur in 1958 after graduation from St. Mary's High School in Lynn. She earned her bachelor's degree in English at Emmanuel College in 1963, a master's degree from Boston College, and a PhD from University of Michigan.

As a young Sister, she taught freshman English at Notre Dame de Namur high schools in Lawrence and Cambridge, Mass. before she returned to Emmanuel College as director of admissions in 1967. Sister Janet was named the college president in 1979.

In April 2022, Sister Janet was honored by the Catholic Schools Foundation with the Carolyn and Peter Lynch award.