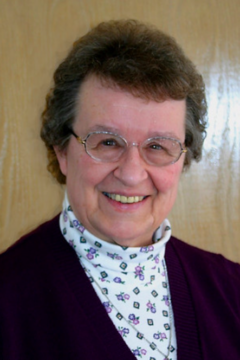 "If God wants you there—you will go there. If He wants you here, then you will stay here."

"Blest is she who believed that the Lord's words to her would be fulfilled."

Joan Marguerite Mary Gregoire is the daughter of Eugene, a French Canadian immigrant from Quebec, and a meat cutter, and Margaret (DeWolf) whose family was from the Belgium-Luxembourg border area. Joan is the third of four siblings: Eugene (called Buddy), her sister Barbara, Joan (born 14 months after Barbara) and finally brother Robert (Bobby). “We were happy children, enjoyed playing with each other, although Buddy was often out adventuring the world,” she recalls. “Mom was at home caring for us in every way. She was my best friend.”

When Joan was three, her family moved to Lowell, Mass., and Joan’s mother learned from a neighbor about St. Patrick School, where the Sisters of Notre Dame de Namur taught. An unexpected extra opening in first grade allowed then five-year-old Joan to start school with her older sister Barbara. As she began her formal education, she had great difficulty learning to read because she was severely dyslexic.

Sister Joan remembers, “One day, Sister asked: ‘How many little girls are going to be Sisters of Notre Dame?’ Everyone stood up except me. Sister, with hands on her hips, said: ‘Well, Miss Gregoire, and what will you be?’ Although painfully shy, I stood up and said: ‘I'm going to be a Mommy like my Mommy, and have 50 kids,’ and I sat down fast.”

Sister Joan is an accomplished musician, and her start began when her mother learned about the opportunity to learn piano. Sister Joan remembers that her mother asked the children, “Would any one like to learn how to PLAY the piano?" “Since I was in the MEEE stage,” she says, “and hearing the word PLAY, which I loved doing, I said MEEE. And that's how I began lessons in the second grade with Sister Mary Genevieve—a great teacher. How God works to get us where He wants us in life.” Thankfully, Joan found reading music to be easier than reading words.

Joan’s declaration at age five that she would become a mother, not a Sister of Notre Dame de Namur, continued until one day when she was a sophomore in high school at St. Patrick’s. “One afternoon, at home, while praying, I heard the Call: ‘Will you be my Bride?’ I was so shocked that I said, ‘Wouldn't you rather my sister? She's much nicer than me!’” And she recalls that when her mother asked her about marriage, “I said I was looking for the perfect man, and Mom said: ‘You won't find him in this life’ and without thinking, I said: ‘So, I'll leave it.’” Joan was surprised by her own response.

When she spoke of entering the congregation while at school, the Sister who taught her in first grade reminded Joan of her earlier stance: “She even remembered what I was wearing on that day and told me that she said to herself at that time, ‘There's our nun!’ I was the only one who entered Notre Dame from that class in 1952, which was St. Patrick's 100th anniversary.”

After expressing her intent to enter religious life, two of Joan’s aunts who were Grey Nuns tried to persuade her to join their congregation. Joan loved children and the idea of serving in their orphanages was appealing. “I was really torn,” she says, “and prayed to God for help. That night, I dreamed of Our Lady, and knew it would be Notre Dame.”

Sister Joan’s first mission was to St. Mary’s School in Lawrence, Mass. Living in the convent there, she remembers, “I was given the bell to ring for rising, and was so nervous I would not wake, because I was such a sound sleeper. I missed it a couple of times, but had been saved by Sister Mary Blanche, a much older Sister in our room, who heard me grinding my teeth, and finally told the Superior to save me from this job.”

For about 20 years she taught music and religion in various forms at schools in East Boston, Waltham, Dorchester and Cambridge. During that time, she was involved in other musical endeavors, like playing violin. I enjoyed working with students performing musicals or Glee Club concerts or preparing students to play in Boston with the youth orchestra.

Changes brought about by Vatican II brought changes for Sister Joan as well. She no longer wore the traditional SNDdeN habit, she had a driver’s license and started living in an apartment with other Sisters instead of in a convent. She also became involved in the Charismatic Movement and with parish work.

While she was always happy to use her musical skills any time she was asked to, Sister Joan moved away from teaching music, focusing instead on religious education, parish work and visiting elders at home and at care facilities. Music was often part of all her work, though.

Her longest mission was at Sacred Heart Parish (later called Holy Family Parish) in Lowell, Mass., where she served for 33 years. Her creativity extended to the programs she designed for baptism and other aspects of religious education, and she was asked to share her work with other parishes. At her farewell Mass, the priest said that everyone who was in touch with her came away with the confidence that they could achieve things even if they thought they couldn’t. Sister Joan was shocked when the congregation responded in unison, with a strong “YES.”

Looking back, Sister Joan can’t choose a favorite among her many ministries, “Because I love variety and learning anything new. Every single mission had something that made me grow and made me learn and made me love. Each mission that I hated to leave opened up a whole new avenue and vision, with new people and students to work with and learn new ideas and such different ways of approaching each task or problem. I loved it all!” As Sister Joan says, “Being open to the spirit brings you wherever you need to go.” The spirit has also brought Sister Joan to visit schools, where she speaks about living with dyslexia to encourage college students and other adults there who face the same challenge.

One of the highlights of Sister Joan’s life was a trip to Namur, Belgium. She felt very at home there and thought it must be because her mother's family came from the area. “When one of the team called me to the archives and showed me that Julie was confirmed by Bishop Gregoire, my heart was deeply moved,” said Sister Joan. “Later, while sitting in front of the Cross at Compiegne, I cried tears of joy. See how God has worked throughout my life? WOW!”