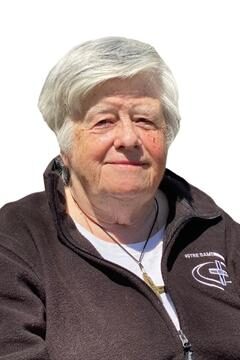 “… Truly I tell you, whatever you did for one of the least of these brothers and sisters of mine, you did for me.”

Joyce McMullen and her twin brother and sister were born to parents William and Alice (Joyce) McMullen. She grew up in West Newton, Mass., where she was taught by SNDdeN at St. Bernard Grammar School and High School. She was very impressed with the Sisters, and it was clear at this time of Vatican II that the Sisters had a strong commitment to the Poor as she did.

Joyce decided to become a Sister, but waited for two years after high school graduation in 1960 before entering. Instead, she chose to attend business school, saying that if she had a little bit more experience in the world before entering, going to business school would be a help no matter what she was doing as a Sister.

For seven years, Sister Joyce taught primary grades, first at St. Gregory School and St. Mark School in Dorchester, then at St. Mary School in Waltham. Then in 1973, Sister Joyce co-founded Project Care and Concern in Dorchester, Massachusetts. Its mission statement is to build nurturing communities in Dorchester where children are cherished, families are supported and elderly are respected.

She remains director of this intergenerational social justice organization, and she is deeply grateful for the financial support from the SNDdeN Congregation, through the U.S. East-West Province, that has enabled its work. She is also grateful for the contributions of Sisters from other religious communities.

Reflecting on the impact of her ministries, she says, “For the past 50 years I have worked with the poor in Dorchester in the Columbia/Harbor Point area and beyond. offering services, programs and support to families. That has been a real blessing to me. I think it’s a blessing to the people I work with as well as to me, learning from them their struggles and their challenges.” Describing it as “a very busy 50 years,” she explains that their services now include senior citizen services and programs, summer camp programs for children, a food pantry and a thrift shop. During the holiday season, they organize outreach to ensure that struggling families receive food and gifts.

Speaking of her experience supporting children from impoverished backgrounds, she describes their opportunity to attend summer sleep-away camps as “a very empowering experience for children.” She adds: “They become independent and that’s what has really motivated me in a lot of ways … I’ve probably sponsored over a thousand children over the years, and many of them went year after year.”

Sister Joyce’s work was publicly recognized when she received the Robert L. Ruffin award as Project Care and Concern was recognized for its “compassionate love and faithfilled service within the Black Catholic community in the Archdiocese of Boston.”

“Probably the thing I’ve learned most in my ministry,” she says, “is that people who struggle have a tremendous sense of other people’s struggles as well. And they also have a way of sharing their expertise with each other, so they empower each other to make the world better immediately in their own circle of family and community. Because of that our world is a better world.”

Sister Joyce shares memory: Not long ago, she had an urgent need for a new van for her ministry. On her housemate Sister Christine McGuirk’s birthday, a former student whom she taught in Ohio asked her what she needed. When she replied that Sister Joyce needed a van, the gentleman donated a 15-person van worth about $40,000. “That was a great blessing and shows the interconnection of the Sisters of Notre Dame de Namur with the mission in many different ways,” said Sister Joyce. “A wealthy man was able to respond because of a Sister of Notre Dame de Namur having been his teacher many, many years ago.”

Sister Joyce does value the connection between Sisters of Notre Dame de Namur, saying that it gives her joy to belong to an international congregation of Sisters and Associates. “We are ministering on five continents. So I’m not just a person doing what I do in the ministry I do. I’m part of something much bigger.”

Continuing that theme when reflecting on her 60 years as a Sister of Notre Dame de Namur, Sister Joyce relates that, “Part of my experience has been that religious life and the Gospel message are very intertwined. I probably could not have done the ministry that I’ve done and am continuing to do for 50 years, except that I’ve had many Sisters of Notre Dame as well as Sisters from other religious communities joining me.”

Sister Joyce’s favorite passage from Scripture, she notes immediately is Matthew 25:40: "…Whatever you did for one of the least of these brothers and sisters of mine, you did for me.” “That’s probably the quote that really energizes me," she explains. "And it also says to give a glass of water in my name or clothe. And when we do direct service, I feel the mission is being accomplished through the Sisters of Notre Dame de Namur.”

To make a gift to the Sisters in honor of Sister Joyce's Jubilee, please click here.