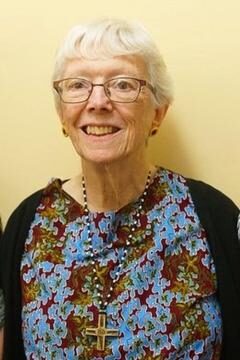 “Glory be to God whose power working in us can do infinitely more than we can ask or imagine.”

Sister Judianne Beltz, SNDdeN, grew up in Springfield, Mass. with her parents and older sister, Marijane.

Sister Judianne ("Judi") attended public schools and catechism classes taught by Sisters of St. Joseph. Her mother was Catholic and her Lutheran father was not a churchgoer. He did read the Bible, however, and tried to live by the Golden Rule.

"He drove us to Mass, catechism, and all church-related meetings and events," recalls Sister Judi.

Sister Judi earned a degree in art education at Southern Connecticut State College and for several years taught art at elementary schools. After returning to school to complete a master’s degree in Educational Media at University of Massachusetts Amherst, she taught media to education students at Norfolk State College (now NSU), a Historically Black College in Virginia.

Sister Judi's introduction to the Sisters of Notre Dame de Namur was through Sister Edna Maier who also taught at NSU. Through Sister Edna, Sister Judi met other SNDdeNs, and began helping young musicians practice for a parish children's Mass.

For five years, Sister Judi became a member of Sisters for Christian Community—a non-canonical group. She then entered the SNDdeNs in 1982, and describes her entry—at age 40—as “a so-called "midnight sacrifice,” drawn both by St. Julie's story and what she was learning about the congregation.

Sister Judi had just completed an associate degree in occupational therapy when she embarked on her first mission as an SNDdeN.

“It was my first occupational-therapy job interview," recalls Sister Judi, "and I had said to St. Julie, ‘If they want to hire me, I don't want to take the position just because it is offered. So show me if it is where God wants me.’"

During the interview, the department head told Sister Judi, "If you come here, you will be working with the poorest of the poor."

She continued to use her art and therapy background, working with children and adults with disabilities and with seniors. In 1992, Sister Judi moved to Kenya where she continued similar work, and later took on responsibilities for overseeing building construction and formation classes for young Sisters.

The ministry that has meant the most to Sister Judi—and selecting one is difficult—began in 1999, when she started and directed the St. Julie Center in Malava, Kenya, which assisted rural children with disabilities. From its beginning—when it served just six children with a therapist coming once a week—it grew to help more than 150 children annually. It offered a full suite of services, including regular therapy, surgeries, placement in special schools, supervised home therapy, workshops for parents and more.

Sister Judi continued that ministry until 2010.

“It has meant the most,” says Sister Judi, “because it started and grew as local needs became apparent, changed lives of children and parents living on the margins in already poor communities, and changed attitudes toward disabilities in those communities. It also seemed as if God were leading the development.”

In 2019, Sister Judi returned from Kenya, joining the Sisters’ retirement community in Ipswich, Mass. Since then, she has been mending and repairing broken items for the Sisters in her "fix-it" shop.

During COVID-19, Sister Judi was an indoor volunteer for the local “Three Sisters Garden,” making labels for hundreds of seedling trays, and now volunteers in the greenhouse. She communicates with the Ipswich Sisters about environmental issues and actions, and is a member of the Community Spiritual Life Committee.

She is currently serving on the SNDdeN U.S. East-West Justice, Peace and Integrity of Creation Committee, and is on the team that is addressing the Laudato Si' Action Platform.

Looking back on her 40 years as an SNDdeN, Sister Judi says she is grateful for 27 years in Kenya and the ministry opportunities and learnings that were possible there, as well as the growth of the Kenya Unit that she witnessed during that time.

"I'm grateful for our place in Ipswich and the Sisters there, and for being allowed to celebrate my 40th Jubilee, in case I don't make it to celebrate the 50th on this earth.”

Looking forward, Sister Judi finds hope in the SNDdeN Chapter calls, in the African Units of the congregation and the Hallmarks of the Sisters of Notre Dame de Namur.

And finally, it gives her hope to see the “taking on of our mission and charism by employees, people in ministries we sponsor, and Associates.”

To make a gift to the Sisters in honor of Sister Judi's Jubilee, please click here.