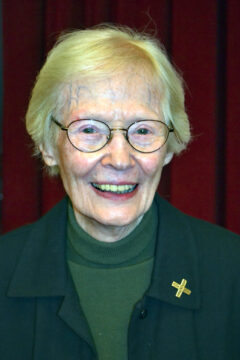 Sister Lillian was born in Boston to James and Rose (Metz) Morris, the oldest of three siblings, and was raised in West Roxbury. She graduated from Girls' Latin School in Boston and Emmanuel College, where she earned a Bachelor of Arts degree in French. She taught for a year before joining the Sisters of Notre Dame de Namur. She took the religious name Sister Jane Marie.

She also earned advanced degrees: a Master's degree in French from Assumption College, and a PhD in German from the University of Minnesota. She taught high school French at St. Mary's in the North End of Boston, in Beverly Farms, at Fitton Central Catholic in East Boston, St. Mary's in Lawrence, and in New Britain, CT. She also taught at Emmanuel College in the Modern Language Department, a department which she also at times chaired. She did a sabbatical year in Vienna, Austria and Basel, Switzerland. She retired in her 70s.

Sister Lillian loved opera and classical music. She was an avid reader, specifically of American history and biographies. She easily made friends and insisted people use language well. She was well organized and always in charge of her life.

Sister Lillian was predeceased by her sister Virginia Coen and brother James "Red" Morris. She leaves a sister-in-law, Marilyn Morris of Weymouth; nieces, Amy Strong and Mary Dooley; a nephew, Robert Morris; and her religious family, the Sisters of Notre Dame de Namur, including her dear friend, Sister Ellen Glavin.

Reflection of the Life of Sr. Lillian Morris

I am permitted to speak to you today by Sr. Lillian. A few days ago she allowed me to do the eulogy, provided I did not make her some kind of hero. She would want it short and to the point and I will speak only the truth.

Sr. Lillian Morris left home in August 1944 on the same day that her brother Jim left to go to the Navy. She entered the novitiate at Waltham; he was sent to the war in the Pacific. Jim returned home after the war; Lillian never went back. In the Gospel you heard in today’s mass Christ called followers who said “yes” but not right away. Lillian would say “You see how hard it is?” Leaving her family was the hardest thing demanded by answering the call to the Sisters of Notre Dame. She did it willingly even though she feared she would be bored for the rest of her life. Sr. Lillian had entered a teaching order and she became an inspiring teacher. 2 days ago I talked to Don Logan our retired history professor from Emmanuel who said one of his students had been studying at Oxford and was finishing a research project in Germany. He asked the student how she managed the language problem. She said she had no problem. She had an inspiring German Teacher at Emmanuel.

Lillian was remembered by students from up to 65 years ago. They kept in touch by calls, and cards, and gifts, and flowers as recently as this past Christmas.

She considered her obligation to instruct the young as a special dedication-serious but joyous. Superiors frequently admonished her not to have so much laughter coming from her classroom! Creating humor was not Sr. Lillian’s only gift. She was also able to spot a student who carried their personal problems into the classroom. At the end of a period Sr. Lillian made time to sit with her troubled learner until some resolution came into focus and steps could be agreed on to relieve her scholar.

She overcame all obstacles to the learning process. One summer when she returned to Emmanuel for the fall semester she found her classroom cut in half because an elevator had been installed in the administration building. A smaller classroom gave her one half the usual blackboard space. She like to have each lesson outlined on the board before the students arrived. This gave visual learners something to follow as well as the spoken word. To fit her outline on the reduced space Sr. Lillian invented a new writing style, now a distinctive vertical script allowed her to fit her lesson in a compacted space.

When she was asked to change her field of specialization from French (her first love) to German she went to the University of Minnesota to get a doctorate in German. This was when she was at an age when it is supposed to be difficult to learn a new language. When she began to teach German she could not find a text book that would help her students so she wrote her own. She photo copied it and distributed it chapter by chapter for each lesson. It is not surprising that her peers voted her teacher of the year.

Her colleagues in the faculty not only admired but trusted her. They selected her as chair person for the sensitive and important Promotion and Tenure Committee of the Faculty Senate. Here her fairness and honesty supported other dedicated teachers at the college. Her personal service to them was as varied as replacing the French teacher who was out on maternity leave even after Lillian had retired from teaching. At another time she stepped in to the classroom to replace a teacher who was getting death threats from a student, (Not much boredom here!)

Lillian’s own academic work carried the hallmark of freshness and originality that always surrounded her. Her delight in the beauty of the French language was challenged by the weight and ponderous structure of German. Her studies finally led her to a writer who used German with the lightness and flexibility of French. She chose for her dissertation topic the use of language in the writings of this author, Nietzsche. She shook up the routine of the predictable order in the German Dept. at University of Minnesota when word got around that a Roman Catholic nun was doing a dissertation on Nietzsche.

Clarity and precision always marked Sr. Lillian’s language but she never frightened students with the force of her intellect. They always felt her support and desire for their success. Even the dreaded double GG written on their essays could be accepted. They could not get away with unexamined comments and empty conclusions. Lillian’s double G was short for Glittering Generalities.

Lillian followed her calling by Christ, called Rabbi, the teacher, even fearing that she would be bored for the rest of her life. She was never bored! Neither did she bore anyone else. Students, fellow teachers, educators at University all found her unforgettable, courageous, inspiring, original, honest, challenging, spirited, joyful and gifted. She was the unique creation God made her to be and enriched every life she touched.

Lillian grew up in West Roxbury, MA, the oldest of three children. She attended the local public school and then went to Latin School and Emmanuel College in Boston. Her first contact with the Sisters of Notre Dame was at Emmanuel, the first Catholic college for women in Boston. After graduation, Lillian taught school for a year and tried to avoid the growing conviction that she was being called to religious life. She finally decided to enter the Sisters of Notre Dame but was afraid that she would be bored for the rest of her days–something that never happened.

Lillian loved teaching French, but when the Sisters needed someone to teach German, she went back to school and got a doctorate in German. She served in Emmanuel's Modern Language Department, sometimes as Chair, but her real joy was in teaching. She still hears from students she taught decades ago. Perhaps she had too much fun since she was corrected more than once by superiors because they heard laughter coming from her classroom.

At this time of Jubilee, she greatly admires all the ministries the Sisters do today and is glad to have taught for over 50 years and contributed to an educated citizenry who are today faced with solving difficult moral and ethical issues.

To make a memorial contribution to the Sisters in Sr. Lillian's name, please click here.