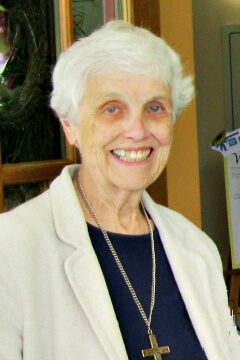 Carol Marie Cotty was born in Winthrop, Mass. An only child, she lived with her parents William and Mabel. She had an aunt and a cousin who were already Sisters of Notre Dame de Namur so it was no surprise when she joined them by entering in Waltham, Mass. in 1951. When she went into the Novitiate, she became known as Sister Marion William.

Always an advocate for social justice issues, Sister Marion served as peace liaison with World Without War for the Diocese of Oakland, California, and was the Social Ministry Coordinator of the Diocese of Providence, R.I. She also served as a pastoral associate for Notre Dame Parish in Durham, CT and served as chaplain at Northeastern University in Boston, Mass.

Wherever Sister Marion has ministered, and even in her retirement, she has worked for peace. For years, each Friday she joined a group of peace activists in silent protest outside the Federal Court Building in Hartford, Conn.