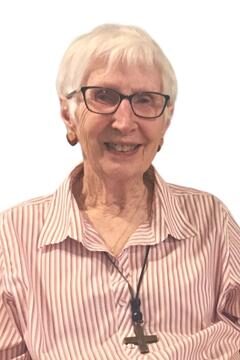 Marna Rogers was born and raised in Worcester, Mass. She was the eldest of George and Margaret (Chandley) Rogers’s four children. She enjoyed the years when her family lived with her aunt and grandmother and Marna loved the area, saying “We had good neighbors from all walks of life and all parts of the world.”

She attended a nearby Catholic school where she was educated by the Sisters of Mercy through the eighth grade, and credits them with nurturing her vocation. Her first exposure to the Sisters of Notre Dame de Namur was at Ascension High School, across town.

Marna’s ultimate decision to enter Notre Dame rather than the Sisters of Mercy was based in her desire for something “wider” than a diocesan group. Though Worcester has always been “home” for family and for periods of her life, she has certainly explored the “wider” world, both geographically and in her ministries as a SNDdeN. “It’s been a very good choice!” she says.

Marna’s parents overcame their concerns about her entering religious life at just 17 years old—with the proviso that she come home if she was unhappy. She did enter the novitiate in 1962 and chose the name Sister Margaret George to honor her parents.

Tragically, Marna’s mother died of an undiagnosed brain tumor just two months after Marna reported to Ipswich to begin her formation as a Sister. Marna felt torn about whether to return home, but with her father’s reassurance and the support of her aunt, godmother and sisters, the family managed as she remained in the novitiate and pursued her education. She earned a B.A. in history from Emmanuel College 1968 and a M.Ed. from Worcester State College in 1975.

“I really feel that all my missions kind of shaped me for the next mission,” says Sister Marna. In Brighton, Mass. where she taught at Presentation School, she felt she “learned about the mission big-time; I loved that community!” Then, she thinks perhaps because the Sister who was Provincial at the time was aware of Sister Marna’s father’s situation, she was assigned to ministries in Worcester so she was nearby for her family. This was an especially important time, as both Marna’s aunt and father died during those years, and she was glad to be able to help to the extent she could.

In Worcester, Sister Marna taught at St. John Elementary School, which brought together children from all over the city. She also served at Our Lady of the Angels School, which she describes as “a wonderful parish experience.”

Her first move away from Massachusetts was for a year in Hawaii, where she taught at Holy Family School in Honolulu, then returned for her first ministry as a high school teacher. She had a good experience at Bishop Fenwick High School on the North Shore, then entered leadership for the first time.

In 1981, Sister Marna became one of a team of three Sisters working full-time in leadership for the Boston Province. She describes the experience as having been very formative and of value for her future responsibilities that would have influence beyond the Province. Following a four-year term, she ministered at a treatment center for Native families in Kakawis, British Columbia, Canada for one year. She then served another term in leadership for the Boston Province.

Sister Marna’s experience of the wider world of the Sisters of Notre Dame de Namur reached its apex when she began her service as a member of the Congregational Leadership Team in 1990. During her six-year term, Sister was based in Rome, Italy, but travelled the world. “I loved the travel!” she says. “I felt we were so well cared for by every province that we went to visit.”

She credits her time in leadership in Boston with making her aware, as she served in the leadership for the Congregation, that “each of the provinces had its own agendas and had its own life experience and we needed to learn from that.” Sister Marna recognizes the sacrifice that Sisters make when they uproot their lives to serve in this leadership capacity, but says, “It's a cost that you don’t regret giving to the Congregation, ever, because it shapes your heart and your mind and your soul, really. You see the Congregation in a whole other way.”

Sister Marna ultimately transitioned to health care ministry after training as a Certified Nursing Assistant and in pastoral education. She worked at Stanley Tippett Hospice in Needham, then served as Chaplain at the Notre Dame Long Term Care Center in Worcester and as a Chaplain at Children's Hospital in Boston. She also ministered at Saint Francis Rehabilitation and Nursing Center as Director of Pastoral Care and Chaplain. For the past six years she has been a member of the Notre Dame du Lac community in Worcester.

When asked what she is grateful for at this time of her 60th Jubilee, Sister Marna responded: “I am especially grateful for all the opportunities Notre Dame has given me over the years. I have met wonderful people and found my sense of the most important things in life grounded in faith and the goodness of people.

“Friends and colleagues over the years, and former students, with whom I keep in touch, all have shaped my worldview. Meeting and engaging with other women's religious congregations always broadened my view of how carefully Notre Dame has prepared us for our work in the Mission!

"While health challenges have emerged, they do not limit my quality of life, and I have always felt that those whom I met in the elevators and corridors of the cancer treatment centers were more challenged than I. I love the experience of seeing new generations in Notre Dame and my own family embrace the challenges of life with courage and mutual trust!"

To make a gift to the Sisters in honor of Sister Marna's Jubilee, please click here.