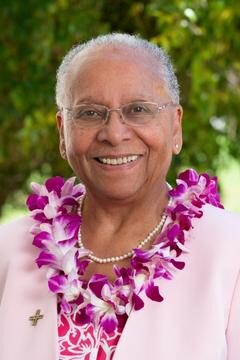 I was born in El Dorado, Arkansas, and grew up there in the Methodist Church, which was a segregated Church. Sunday School and other church activities for children always included music, singing and speaking. This was teaching and learning about God, and our history. Children were also taught that what gifts/talents we were given were to be shared with those who had less.

My older brother, Edwin, and I were given the opportunity to learn piano, violin and singing, so we were always in some musical activities in elementary school or church activity.

After my family moved to Alameda, Calif., and when I was in the 8th grade, I began attending St. Joseph School, where I met the SNDdeNs, and after graduating, it was natural for me to go to Notre Dame Academy, which was 'next door.' At Notre Dame Academy the SNDdeNs were very good to all of us students and I developed more of my musical talents in piano and in voice. They also urged me to seek a music scholarship to College of Notre Dame in Belmont, Calif.

I went to the College of Notre Dame for my freshman year and then entered the novitiate in 1952. As Sister Martin de Porres, I continued my education, earning a bachelor's in music, specializing in voice.

My goal of teaching music was immediately realized when I was assigned to the music department at Notre Dame High School in Belmont, Calif. When the music department head was unable to return to school for a time, I was asked to fill her shoes. This surprising opportunity was both thrilling and daunting.

In 1968, I became a founding member of the National Black Sisters' Conference (NBSC), an inclusive Catholic organization of vowed Black Catholic Women Religious and Associates from many congregations of religious across the United States. I have served terms on NBSC’s board of directors, been treasurer and led a significant initiative to reach out to Black Catholic Women. I have used my musical gifts at many NBSC gatherings over the years.

In 1970, I was invited by two Redemptorists to join them at Our Lady of Lourdes Parish, in mission to the Community in Hunters Point, which was the poor Black community of San Francisco. Most of the people had been 'pushed out' of the center of the City many years before, and most were unable to afford to live elsewhere. We formed a ministry team and served the people in their many needs. I worked with the youth—forming a Gospel Choir, where the teens learned about music, leadership, service and responsibility, and Black Church History. An adult Gospel Choir was also formed and both choirs helped to prepare the Liturgy for the Sunday Mass. Some aspects of both choirs endure today.

Later I began sharing my gifts in eldercare settings. In 1991-92 I held the position of Assistant to Manager of Senior Housing at Del Notre Apartments in El Cerrito, Calif. In 1993-97, I was Administrator of the Thea Bowman Manor, a complex for seniors and those eligible for Section 8 housing.

In August 1998, the SNDdeNs of California made the decision to move their Sisters in retirement and those needing more care to Mercy Retirement and Care Center (MRCC) in Oakland, Calif, rather than maintaining their facility for these Sisters in Saratoga, Calif. I had been volunteering in helping those who needed and because I lived nearby.

By November of the same year, the Province had in place a Health Care Plan, and Ann Comer was hired to be the Director of Health Care. I was asked to work with Ann Comer as the Health Care Coordinator/Pastoral Coordinator for the Sisters at MRCC. I had begun volunteering to prepare and provide the music for the Liturgies at MRCC, and in 1999, the chaplains and Administrator asked if I would continue. I remain in this ministry.

To make a gift to the Sisters in honor of Sister Martin's Jubilee, please click here.